What Is Twitch? How Do Brands Use It?


Like many people, I discovered Twitch through my love for video games,watching YouTubers play and review some of my favorites. Most of the YouTubers I watched promoted their Twitch accounts where they would broadcast live play-throughs, and I eventually started to wonder — what is Twitch?

Ultimately, Twitch is a streaming platform, but is there more to it? In this post, we’ll explore what Twitch is and how you might use it to engage with prospects and increase brand awareness.

Twitch is an online platform for live streams. Its users can either broadcast a live stream or watch other streamers. The streamers usually give gameplay commentary, while the viewers connect in a chat on the sidebar.

When you visit Twitch, you’ll see a screen very similar to the image below. The homepage is curated based on previous activity, so while this screen is covered with gaming content, streamers don’t have a limit on what they produce.

What is Twitch Used For?

Twitch is mainly a platform for gamers to watch and perform live play-throughs and commentary. However, there are other programs such as talk shows, cooking shows, sporting events, and gaming conventions that also pop up on the site. Twitch enables fans to connect with streamers, and it allows users to watch content they’re interested in on a platform that supports long-form, live broadcasts. In fact, it’s common for streams to last for an hour or two.

The platform also has its own convention called TwitchCon — a bi-annual event celebrating the streaming industry as well as a chance for the platform’s broadcasters to connect with their fans and peers in person.

Fans can attend sessions led by their favorite streamers and buy branded merchandise from a slew of vendors and event sponsors. For example, Doritos is a proud sponsor of TwitchCon.

Though the streamers produce the content, Twitch has a dedicated fanbase that expands across the globe. To get some perspective on Twitch’s users, we’ll take an in-depth look at Twitch’s primary audience.

When SimilarWeb studied the web behavior of Twitch users, they found primary keywords this audience searched for were “video games consoles and accessories,” “games,” “software,” and “news.” From that information, we can infer that the majority of Twitch users are interested in games and the technology needed to play them.

In the same report, it was also noted that 21.41% of traffic comes from the U.S., making it the country with the most representation on the platform — with Germany, Korea, Russia, and France not too far behind.

Though the audience has a large young male presence, that demographic isn’t the entire platform’s user base.Twitch’s most popular female streamer, Pokimane, has 9.2 million followers — making her one of the platform’s top 10 most popular streamers.

Still, as marketers know, those numbers could be an essential part of your target audience.

If, by now, you are mulling over a few ideas about how you can fit Twitch into your marketing efforts, let’s talk about how brands are using Twitch, next.

Brands use Twitch to increase brand awareness, target specific audiences, produce branded streams, and leverage influencer marketing. The site is powered by visual content, so let’s explore some examples to back up these goals.

Ads for Brisk ran throughout the tournament and a Brisk-themed car was released into the game for players to use. Viewers could also cheer for the live commentators to drink Brisk, and the phrase “Take the risk, drink the Brisk” formed organically among participants and became a meme for the brand.

Video game company EA teamed up with streamer RoryPlays to promote The Sims 4: Cats & Dogs. The campaign was pretty straightforward — RoryPlays played the game live on Twitch and included an EA logo overlay. She also promoted the game and brand verbally on her platform.

If you’re coming to EA Play, come by @TheSims booth to get HANDS ON Seasons!! pic.twitter.com/LYABmWHDiH

To promote Reese’s Pieces chocolate bar, Hershey partnered with multiple influencers, like Ninja and DrLupo, who have millions of followers on Twitch. During the campaign, those influencers ran livestreams while tasting the new product.

Through the campaign, millions of people were introduced to the new candy bar via their favorite streamers enjoying the candy live.

Luxury car maker Lexus partnered with popular video game streamer Fulsie for the company’s “All In” Twitch campaign. During the campaign, 23,000 Twitch users voted on how to modify and customize the 2021 Lexus IS sedan. Twitch users wound up designing the ultimate vehicle for gamers and included a 3D-printed controller inside the car as well as gaming consoles.

AHHH I am so excited to reveal the new @Lexus Gamers’ IS that we designed together last month! Lexus took their sport sedan to the next level and built our dream gamers’ IS. Join the stream – I’ll be giving you guys a detailed tour of the car 😀 https://t.co/0e3xBSXNSH #ad pic.twitter.com/I1LPVPtfoZ

UberEats partnered with Ninja to offer subscribers a 25% off coupon. The promotion came in the form of a challenge. Every time Ninja “killed” a character in Fortnite, he would win fans 1% off their UberEats order. The catch was that there was a time limit — Ninja could only take part in the challenge from the moment he ordered his food with UberEats until the food arrived at his door.

By the time the challenge was over, Ninja won his fans 25% off their order and the offer had been used to its maximum capacity.

The 1,000 Dreams Fund is a non-profit devoted to providing 1,000 university women with grants to help them achieve their dreams. The non-profit provides new grants every academic semester, and the people behind 1DF partnered with Twitch to bring the program to streamers.

Through the Twitch partnership, the fund provides financial assistance to female streamers currently attending college. The fund is meant to help with their school expenses. Twitch might provide financial aid for conventions like TwitchCon, conferences, new hardware, or educational programs that are devoted to creative pursuits.

During Women’s History Month, Twitch’s Facebook account ran an ad that supported the fund, bringing awareness to 1DF and what it does for women streamers.

This gave an entirely new audience an introduction to the non-profit. It also showed Twitch’s diverse user base and highlighted a cause the company supports.

WildEarth (WE) is a broadcaster that shows the day-to-day lives of animals — led by expert zoologists in Johannesburg, Australia. Recently, the site’s leaders decided to expand their broadcast to Twitch in order to broaden their audience.

The streams are short, which is unusual for Twitch, but makes sense for WildEarth. Content includes a sunrise safari led by expert Lauren, in which she focuses on animals she sees on her drive and provides information about them. 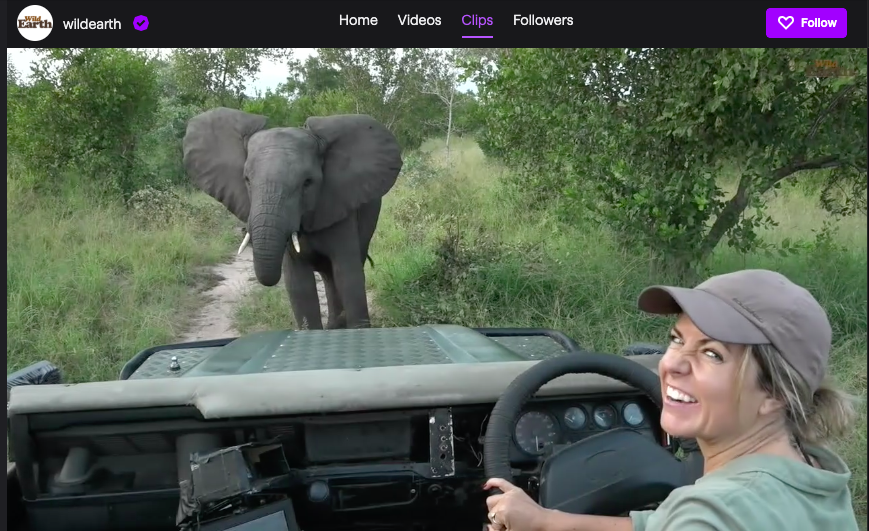 WE is aimed towards younger viewers, so it’s no surprise that broadcasts have expanded to Twitch and YouTube. Some clips even have kid-friendly titles with emojis and current slang to attract these younger viewers.

The broadcast featured her making the instant noodles during a stream. To keep the content fun and engaging, Pokimane added a ‘Slurp Meter’ graphic on-screen that measures the volume of her eating her meal. 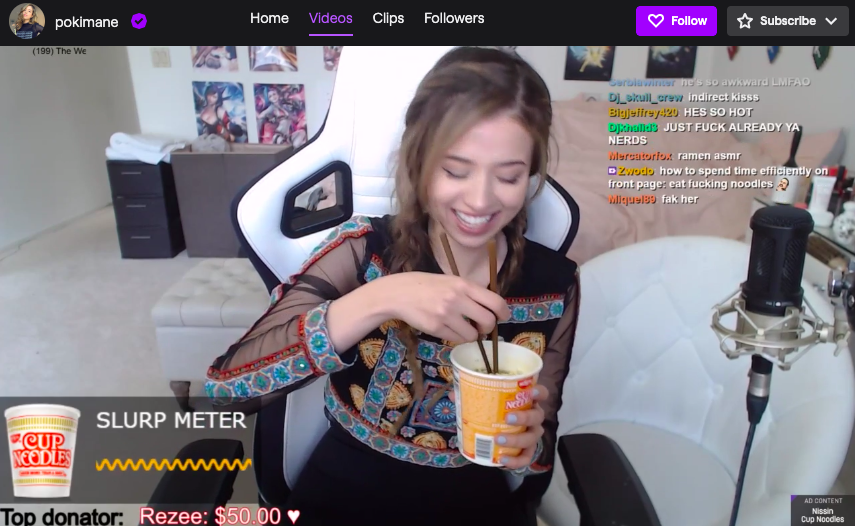 Nissin’s branded stream has been seen by over 11,000 of Pokimane’s fans. This marketing technique cemented Nissin as a brand associated with her community, showing how their product fits into the gaming lifestyle.

Ninja is one of Twitch’s most-followed streamers with 18.3 million followers. To get those followers interested in their brand, and to celebrate TwitchCon 2018, athletic underwear brand PSD gave the streamer a bus:

Hitting the road and heading to TwitchCon with our newly wrapped @ninja bus! 🔥🔥 pic.twitter.com/AHKDI1ocVC

This partnership is a change for PSD, which usually partners with basketball, football, or wrestling athletes. A video game athlete partnership could be part of a strategy to attract audiences on a different platform. It also shows the flexibility of the product.

In a similar practice to Facebook and YouTube, Twitch plays video ads before their streams, also known as pre-roll ads.

This Indeed ad shows a case study about how a Twitch streamer and digital artist used Indeed to connect. The streamer was looking for a designer to make her streams more engaging and found her talent on Indeed, a career search engine. 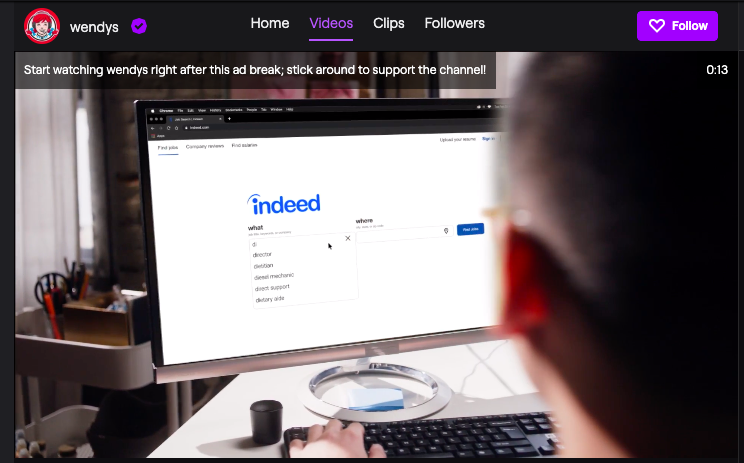 The ad paints a picture of how gamers, streamers, developers, and creatives can use Indeed to find support for their work on Twitch. It shows how a streamer can leverage Twitch to find talent — and how talent can find work.

Animal Crossing: New Horizons came out in March 2020. Marketers at Wendy’s knew Twitch would be flooded with Animal Crossing streams upon the release, so they decided to capitalize on that.

The campaign is simple: a gameplay broadcast following the Animal Crossing adventures of the store’s mascot Wendy. There are several clips and streams on the account, and most of the titles include “Free Delivery” to remind Twitch users that they don’t have to leave the site to eat Wendy’s. 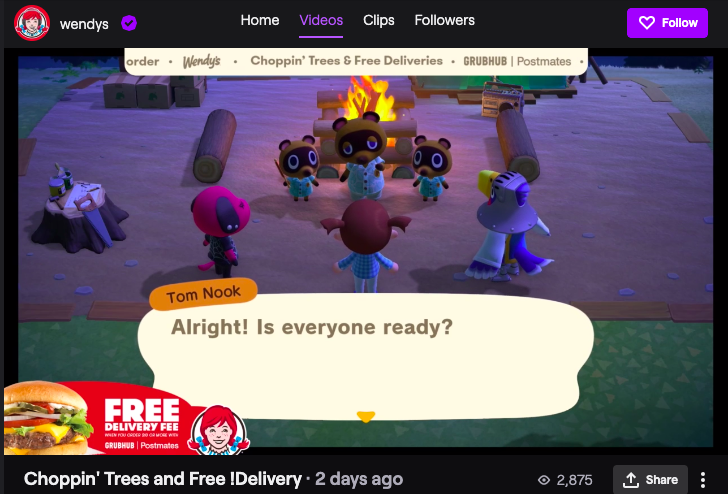 Notice the extra steps the campaign takes for the branded stream. In the bottom left, there’s an advertisement for free delivery from Postmates and GrubHub. At the top is the title of the campaign, ‘Choppin’ Trees & Free Deliveries,’ as well as the logos of participating brands.

Should your brand leverage Twitch?

Multiple companies use Twitch to promote their brand by catering to a young audience. If your company has a similar goal, then Twitch might be a great asset to you. Twitch is especially useful if you’re looking to leverage influencer marketing. Influencers have a very loyal fanbase and can use their following to expand your audience by endorsing your brand. We saw this with Pokimane’s noodle stream as well as with the collaborations between Ninja and multiple companies.

Another benefit of leveraging Twitch is boosting leads with ads. For example, shampoo brand Head & Shoulders used Twitch to market its new men’s styling creams. This was achieved by partnering with the platform to run a contest in which Twitch users could win 100,000 Bits, which is the site’s virtual currency.

The target audience for this campaign is men, so the team behind the campaign knew they would have an audience on Twitch thanks to its largely male demographic.

Alternatively, if your audience is using Twitch as part of their web behavior, you might look into investing in Twitch content. While you don’t have to create a Twitch account and start uploading numerous streams, you can go the Indeed route and use an ad that relates to Twitch’s users.

For instance, maybe the company you work for sells computers. A great way to leverage Twitch in a product marketing campaign is by making an ad that shows a popular PC game on the platform right now, like League of Legends, and how it works with the computer you’re aiming to sell.

Twitch is an expansive platform where creatives can engage with subjects that interest them. You can leverage Twitch in multiple ways and reach an expansive audience by doing so. As a casual Twitch user, I look forward to seeing what you come up with for your Twitch campaign.

As more enterprises migrate apps and workloads into the cloud, so grows the need for more sophisticated tech to secure{...}

In 2021, marketers that used influencer marketing said the trend resulted in the highest ROI. In fact, marketers have seen{...}

Day before There are tons of devices to choose from when it comes to smart home products. A new competitor{...}