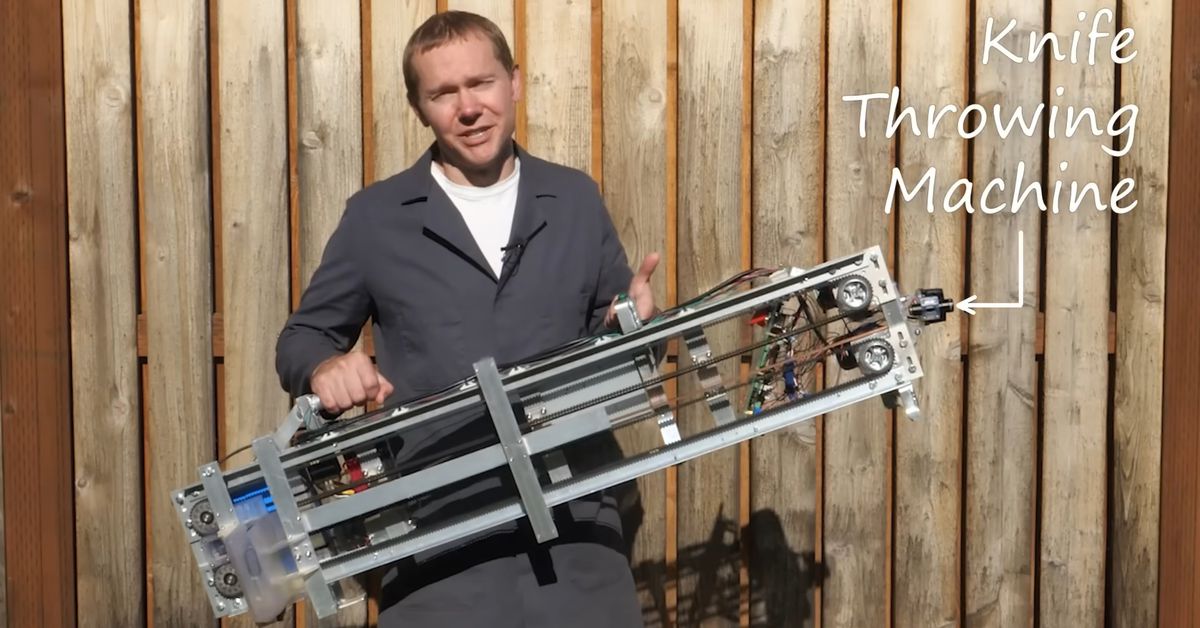 It looks like something out of a video game, but this gadget is real: a portable, mechanical, computerized, laser-guided knife gun that actually throws spinning knives end over end through the air (via Gizmodo).

This isn’t some slingshot or spiral Kunai shooter that flings those blades straight ahead, oh no — Quint Builds set out to build a gadget that can accurately throw knives just like a pro, nailing a target 10 times in a row at different distances. That meant painstakingly calculating how to spin a knife the right number of times to land tip-first, again and again and again — and employing a homemade lidar laser guidance system to measure that distance and adjust the knife’s trajectory accordingly.

Otherwise, a knife might harmlessly bounce off the target… just like mine did so many times at the last Renaissance Faire I attended.

The final contraption dispenses upwards of 10 knives from an integrated, spring-loaded magazine onto an electromagnet attached to a carriage, which zooms forward along its track at 10 meters per second thanks to a pair of motorized belts, which are in turn powered by a pair of 36V hoverboard batteries. Once the carriage reaches the midpoint of its track, the electromagnet is programmed to release the knife — letting it hit a target up to 15 feet away.

I guess you can add “knife throwing” to the list of tasks where humans are becoming obsolete!

ST. PETERSBURG, Fla. (AP) — Fewer manatee deaths have been recorded so far this year in Florida compared to the{...}

Welcome to Startups Weekly, a fresh, human take on this week’s startup news and trends. To receive this in your{...}

"The branding is a window into the impact the company will have on the world and how Intel will celebrate{...}