Viral video: Lately, many viral videos of energetic elderly dancing have only proved that age is just a number. And no one defines the essence of this phrase better than the ‘Dancing Dadi’ who has won hearts on the internet for her amazing moves. She’s back at it with another viral video. In her new dance video, 63-year-old Ravi Bala Sharma can be seen grooving to Sara Ali Khan’s feisty song Chaka Chak from the upcoming movie Arangi Re. In the video, she can be seen wearing a green and red saree that almost resembles Sara Ali Khan’s in the song.Also Read – Viral Video: Instagram Influencer Makes Apple Pakodas, Internet Baffled | Watch

As the video begins, she dances her heart out to Chaka Chak’s tunes as she climbs the hook step of the song. As she dances she also flashes her gorgeous smile and her expressions are on point too. Her energetic performance is a feast for the eyes. She shared the video and simply wrote:Chaka chak.”

Needless to say, the video has gone viral, garnering over 15,000 likes and various comments. People were in love with Sharma’s lively dance and showered with praise in the comments section. One user wrote: “Oh Wow Looks and dances fantastic”, while another commented: “Wowww❤️❤️❤️you are such a graceful aunt.. God bless…”. A third wrote, “Prettiest madam, you won this challenge,” while another said, “You danced Auntie so beautifully and gracefully.”

Here are other notes: 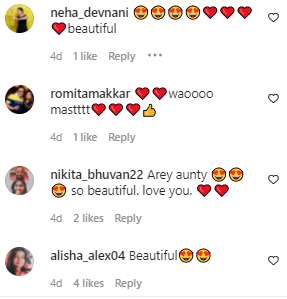 Ravi Bala became famous after she posted her first video on Instagram during the lockdown. Since then, she regularly posts videos of her dancing and grooving to music on Instagram and Facebook that will surely soothe your soul. She is often referred to as Dancing Dadi and has 154K followers on Instagram.