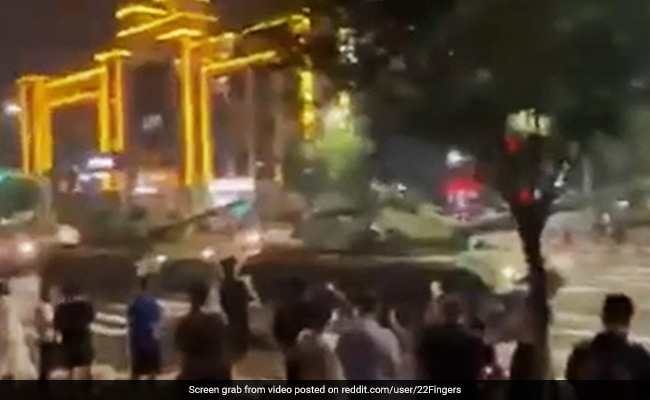 A row of tanks is seen deployed outside the branch of a local bank in a Chinese city.

A video showing tanks lined up on a road in China has shocked the internet. Quoting local media outlets, users on Reddit say that the footage is from Rizhao, in Shandong Province and the tanks have been deployed to protect the local branch of a bank at the heart of a scandal. The issue first surfaced in April when South China Morning Post (SCMP), in an article, said that residents of Henan and Anhui provinces were denied access to the bank accounts due to a “system upgrade”.

The video clip from Henan shows a long queue of tanks preventing locals from reaching the bank branch. As the camera pans, the tank queue is seen covering the entire block.

The locals look agitated but are forced to wait because of the presence of the armoured vehicles. Reddit users compare the scene with the Tiananmen Square incident when in 1989, hundreds of tanks were used to crush pro-democracy protests.

“Tiananmen square 2: electric boogaloo,” commented one user. “Something… something… History repeats itself,” said another.

“I wonder what would happen if the tank operators can’t withdraw their money as well,” a third user commented.

The locals hit by the banking crisis, one of the worst in recent years in China, claim 40 billion yuan (US $6 billion) in deposits have disappeared and have been protesting demanding access to their savings.

They have been told to “wait patiently”, SCMP said in a report on Monday. Some of the people with less than 50,000 yuan (US $7,400) received their money last week but others are still waiting.

Chinese authorities said that the banks at the centre of the controversy were taken over by Henan Xincaifu Group through “internal and external collusion” and “illegally” attracted depositors. An investigation into the banking scandal is going on.