It’s the perfect time to think about upgrading the storage on your PS5 or PC now that the Crucial P5 Plus SSD is on sale.

The preamble to the official Black Friday sale has given us a wide variety of deals on a multitude of products. But one of the best products to buy during this shopping season is an SSD, as they rarely see price drops during the rest of the year.

To that end, we’ve discovered a fantastic deal on the 1TB Crucial P5 Plus SSD, which has had its price slashed by 28%, bringing the price down from £131.99 to just £94.99. You also have the option of splashing out on a 2TB or 500MB variation, although that will impact the pricing.

And if this SSD deal isn’t to your fancy, make sure you check out our best Black Friday deals roundup which is constantly updated throughout the entire sale so you can stay in the loop on all the best discounts. 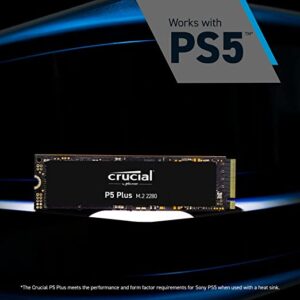 This SSD can be used with a PS5 or a PC, although you may need to check that your PC is compatible with the Crucial P5 Plus.

It features PCIe 4.0 NVMe technology which has a marked improvement over its predecessor in terms of speed and performance, meaning that you may be able to improve your PC performance overall.

Crucial claims that this SSD has up to 6600MB/s sequential reads and a random read/write score of 630K/700K, which should be more than enough for mainstream games.

As we can see from the price history of this SSD below, its pricing has fluctuated over the last few months, making it less likely that it will go on sale again once Black Friday is over. Many other SSD deals have also already run out, meaning that you may want to jump on this deal now if you’re looking to nab a discounted SSD before the New Year.