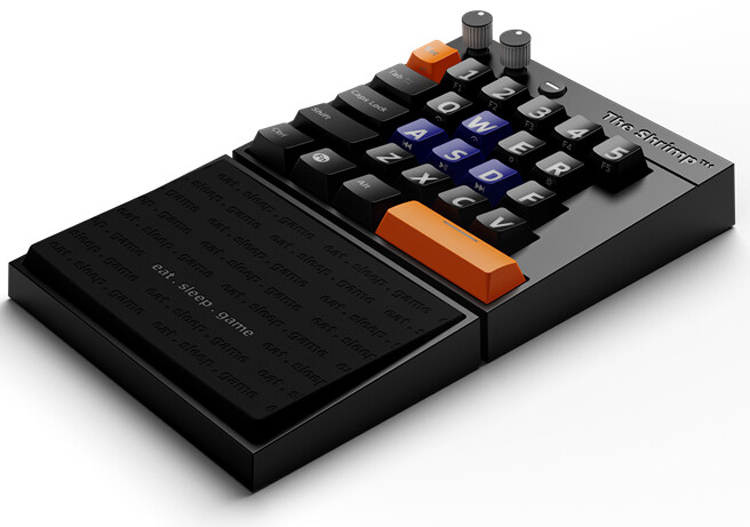 An upcoming mini keyboard was just teased for the first time, and to say that it looks a little peculiar would be an understatement. The Shrimp, as the keyboard is called, is a tiny device made for gaming on the go.

Equipped with only the necessary buttons, this keyboard won’t help you write an email or chat with your colleagues, but it could prove to be an interesting alternative to using a full-size keyboard on a gaming laptop.

We’ve seen plenty of mini gaming keyboards over the years, such as the Corsair K7 Pro, but this isn’t that. The Shrimp gaming keyboard is a tiny device with just a handful of keys, making it entirely useless for anything other than gaming. At the same time, it still maintains a proper keyboard layout.

Unlike some mini gaming keypads, the Shrimp utilizes the full one-third of a full-sized keyboard, covering the keys necessary for movement and some key bindings most commonly used in games. There’s a difference from standard keyboards, however, and it’s found at the very top — the numbers and function keys are combined into a single row.

At the first glance, the keyboard looks a little funny, but the colorful designs tilt that impression in the direction of “cute” rather than “ridiculous.” It seems that the Nordic Game Supply (NGS) will be releasing the device in several colors and art schemes, ranging from a semi-traditional, mostly black design to a mix of pinks and oranges. The keyboard also comes with a textured magnetic wrist pad.

The Shrimp comes with Gateron G Pro switches and a total of 25 classic Cherry keycaps. The lettering on the keycaps is oversized and comes with a range of RGB lighting options. NGS also added some sound-dampening tricks to the device, and the keys are supposedly going to be easy to map. According to the press release, first shared by TechPowerUp, no extra software will be required to map the keys to match your needs.

At the top of the keyboard, you’ll find two knobs, presumably used as multimedia controls. The keyboard can be connected via USB-C and is said to be compatible with desktop PCs, gaming laptops, and PlayStation 4 and 5 consoles. Unfortunately, the company is yet to reveal the availability and the pricing of the new product.

For most gamers, the use case of this keyboard will be rather limited. If you’re already at home and playing, you might as well choose one of the best gaming keyboards that also lets you do something else from time to time. However, if you tend to play on the go, the Shrimp might prove useful. It’ll fit in a backpack and should still be more comfortable to play on than a regular laptop keyboard.