Contemporary Amperex Technology Co. Limited, or CATL in short, is a Chinese battery manufacturing and technology company that also happens to be the supplier of batteries to Tesla. The company also works with other EV makers from different parts of the globe and is the largest EV battery manufacturer in the world.

CATL has announced that its new battery pack, which has been christened, the Qilin, will go into production in 2023. The battery pack will use advanced battery technology and increase the energy density of the cells. This will allow CATL to pack in more energy in any given cell as compared to other battery packs. The Qilin is said to have an energy density of 255 watt-hour energy density per kilogram, making it 13 percent higher than what Tesla uses in its Tesla Model Y electric SUV. 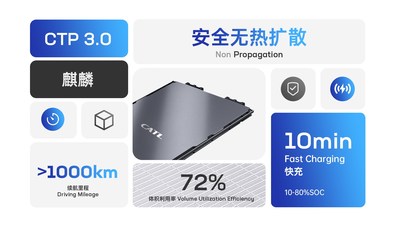 In fact, the Qilin, on paper, claims to deliver more range to its customers than any other electric vehicle currently in series production. According to CATL, the Qilin could provide a driving range upwards of 620 miles or 1,000 kilometres. This trumps the Telsa Model S, which gets users around 405 miles of the claimed range. The Lucid Air, one of the more expensive EVs, gets around 520 miles of range per charge.

Moreover, CATL also claims that Qilin is capable of charging from 10 to 80 percent in just 10 minutes. This could make it one of the quickest charging battery packs.

However, many of the claims are based on CATL’s claims, and we suggest it be taken with a pinch of salt. Currently, no European or American car manufacturer seems to have shown interest in the new battery pack. But, two Chinese manufacturers of electric cars, Hozon and Li Auto, have put forward their names for equipping their upcoming cars with the new battery technology.