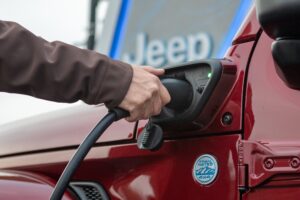 Stellaantis announced earlier this week that it was testing a new concept for driver and pedestrian safety on a Jeep Wrangler 4xe plug-in hybrid in Blacksburg, Virginia.

The pilot was part of the 5G Automotive Association (5GAA) live trial of cellular connected vehicle communications and multi-access edge computing (MEC) technology, according to Stellantis. The 5GAA connected car concept uses fixed, on-site cameras and sensors to collect detailed data that contributes to what a vehicle can ‘see’ using its on-board systems.

The testing equipment allowed the Wrangler to warn pedestrians and other vehicles of its position and receive emergency alerts from the cellular network.

“Making roads safer for motorists and pedestrians is the ultimate goal of developing these next-generation technologies,” said Ned Curic, Chief Technology Officer of Stellantis, in a statement. “The Jeep Wrangler 4xe plug-in hybrid is the perfect vehicle for these live tests, equipped with vehicle-to-all (V2X) technologies and driver safety alerts. With 5GAA, we are partnering with industry leaders around the world to pave the way for autonomous technology that benefits our products and ultimately our customers.”

5GAA states on its website that the new concept enables “near-real-time notification” of hazards on the road through 5G and edge technologies.

“5G transmission speeds and so-called ‘Edge’ servers – locally installed, high-performance computers that can run artificial intelligence programs – open the door to smart city technologies such as near real-time traffic management and countless other business applications,” states 5GAA. † “The connected car concept uses this high-speed and edge computing technology to communicate via a user-authorized mobile app with car sensors and pedestrian smartphones – about traffic hazards, such as accidents and road construction – for pedestrian and motorist safety and efficient navigation. .”

A similar testing program is underway in Turin, Italy to evaluate 5G cellular technology and the management of large amounts of data, including the sizing and configuration of in-vehicle computing capabilities, Stellantis said in a statement.

5GAA stated that demonstrating that the connected car concept can work in a roaming scenario is the core objective of the live trial and is the first such effort in the United States.

Prev post Eidos Montreal has "no regrets" on Guardians of the Galaxy sales
Next post Watch: Police use 'Find My iPhone' to track kidnapped child - CNN