Reddit quarantines r/Russia due to ‘high volume’ of misinformation – TechCrunch


As major social platforms grapple with an influx of misinformation around the Russian invasion of Ukraine, Reddit is having its own reckoning.

On Tuesday, Reddit added the subreddit r/Russia to its quarantine list, restricting the community from popping up in search results and marking it with warning messages. The intermediate measure is the same step that Reddit took to rein in r/The_Donald, one of its most infamous toxic communities, before the subreddit eventually earned a full ban. 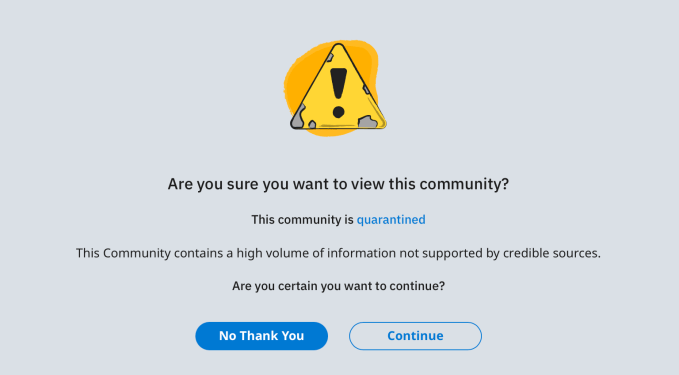 Now, visiting r/Russia brings up a page with the warning “This community contains a high volume of information not supported by credible sources.” While Reddit users can still visit r/Russia by clicking through the warning, the message remains at the top of the page.

The subreddit r/RussiaPolitics was also added to the quarantine list and given the same treatment. Mashable first reported the company’s actions against r/Russia, which boasted 265,000 members just prior to the quarantine.

The day before r/Russia was quarantined, posts pinned by its moderators were accompanied by the tag “denazification” and a Ukrainian flag followed by flames. Another pinned post falsely accused Ukraine’s government of intentionally maximizing casualties, using human shields and refusing negotiations.

According to Reddit, quarantine status is designed to “prevent [a subreddit’s] content from being accidentally viewed by those who do not knowingly wish to do so, or viewed without appropriate context” — leaving a community accessible to the users who were already participating but limiting its reach.

While r/Russia appears to have earned its quarantine by disseminating pro-Russia misinformation about the invasion of Ukraine, one of its moderators also ran afoul of Reddit’s rules. Reddit noted that it “removed a moderator for acting in bad faith” and has connected with the remaining mods to “remind them of our policies.” The company declined to elaborate further on the moderator’s behavior.

“We are clear in our policies that moderators and users may not attempt to manipulate and interfere with the conversations or communities on our platform,” a Reddit spokesperson told TechCrunch.