Recently, OutSystems announced a new cloud-native application platform, codenamed Project Neo, at their annual NextStep event. It marks the first time in the company’s history that OutSystems has launched a second platform alongside OutSystems 11, a platform for enterprise-grade low-code development.

Project Neo is now available for public preview ahead of its official launch in 2022. It combines the productivity benefits of visual, model-based development with containerized and Kubernetes-based cloud architecture. The platform allows developers to create everything from mobile apps and consumer websites to workgroup software and extensions to other core systems such as Microsoft, SAP and Salesforce in the cloud. By automating DevOps procedures, managing advanced cloud runtime, automatically documenting code, resolving code dependencies, performing regression testing, and enforcing architecture standards, the new platform addresses the essential yet undifferentiated parts of development. 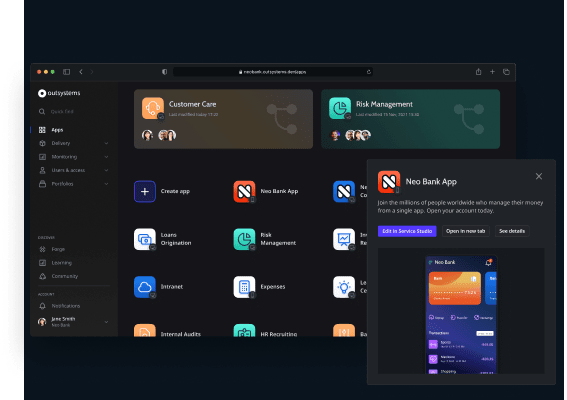 According to an OutSystems news blog post, developers can benefit from using Neo as they can focus more on code, make critical changes in hours, use the latest updates, and take advantage of its autoscaling capabilities. In the same blog post Paulo Rosado, CEO and founder of OutSystems, said:

OutSystems breaks the boundaries of traditional software development. With Project Neo, we designed a platform that allows any development team to build any web-scale app. Developers should be the artisans of innovation in their organization, but they are trapped in complexity that stifles their ability to innovate and differentiate. Instead of using their talents to repair, modify, and maintain code and legacy systems, you can give them industry-leading tools that unleash their creativity on your business and gain a massive competitive advantage.

Our customers require state-of-the-art applications that are tailored to their unique business needs and that can evolve seamlessly and easily scale to hundreds of millions of users. They want a platform that allows their IT departments to build and use custom apps that mirror the quality of the world’s Netflix or Ubers, even if they don’t have an army of developers. That’s why we designed this platform, which delivers the benefits of visual, model-based development with a container- and Kubernetes-based cloud architecture hosted on Amazon Web Services, so that even a small team of developers can build any type of app for any kind of device.

Finally, developers can try OutSystems 11 for free through a trail and preview of Project Neo.