AV Nvidia wants to help you build digital twin worlds, provided you have the money and patience.

Nvidia had a load of news about its Omniverse platform to announce at its GPU Technology Conference (GTC) 2022 on Tuesday. Nvidia VP of Business Visualization Bob Pette began what amounts to an announcement of how well Omniverse has performed over the past year: “We believe Omniverse will be our biggest growth engine this year.”

The Omniverse ecosystem launched last year has grown 10-fold, said platform VP Richard Kerris, with major players like Unreal Engine, V-Ray, Blender and others adding connections to the technology. Omniverse is Nvidia’s software package for creating 3D spaces in which one can produce simulations, do design and engineering work, and work on so-called digital twins of real-life structures for maximum realism. It’s about creating content and blueprints, collaborating and testing in virtual reality, if you just want to be direct about it.

Of all the new features announced at GTC, Omniverse Cloud is arguably the most interesting. Nvidia said it’s exactly what it sounds like: “A suite of cloud services that gives artists, creators, designers and developers direct access to the Nvidia Omniverse platform.” 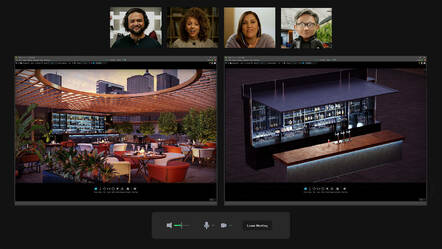 A view of employees in an Nvidia Omniverse Cloud instance

Omniverse Cloud uses Nucleus (in this case Nucleus Cloud) as the center of its software universe. Nvidia describes Nucleus Cloud as a “one-click-to-collaborate” tool that allows large 3D scene files to be shared and edited using backend systems. How do you edit and view those scenes? Via Omniverse Create and Omniverse View, the same apps used in Omniverse on-premises setups, but from the cloud. It works similarly to Nvidia’s GeForce Now web-streamed gaming service, which can be viewed in a browser.

“What this really means is that whether you’re using a Chromebook, Mac, tablet, or any other device to connect to GeForce [Now]now you can stream, create and view your systems, and work and collaborate with other Omniverse customers,” said Kerris.

Unfortunately for those interested in jumping into the Omniverse Cloud, it’s still “in development”. However, a Nucleus Cloud early access program is available.

OVX servers are large: eight A40 GPUs, three Nvidia ConnectX-6 Dx 200 Gbps NICs, 1 TB of system memory, and 16 TB of NVMe storage. Those individual servers are configurable in pods of eight, all the way up to an OVX SuperPOD made up of “32 OVX servers connected to Nvidia Spectrum-3 switch fabric or multiple OVX SuperPODs,” according to the biz.

OVX servers and SuperPODs will be available from Inspur, Lenovo and Supermicro later this year.

Omniverse Enterprise on Nvidia LaunchPad, a free out-of-the-box app for businesses looking to demonstrate Omniverse capabilities, was expanded to nine regions, and additional labs and pre-populated scenes were also added.

Numerous other new features and tools have been added, and major updates include:

There are also lots of small announcements, so be sure to read Nvidia’s full rundown of new Omniverse features.