Talks between Israeli and Palestinian officials over setting up long-awaited Palestinian 4G cellular networks have stalled over Israeli “delaying tactics,” even as the Israeli government advances more bandwidth for West Bank settlements, officials told The Times of Israel.

Israeli officials issued tentatively approved 4G cellular service for Palestinian cellular companies back in November. The decision was made as part of the current Israeli government’s policy of strengthening the Palestinian Authority economy.

But over seven months later, there has been little progress in the talks. Officials familiar with the negotiations blame Israeli delays and proposals they say provide little chance to build viable 4G Palestinian networks.

Israel maintains security control over the West Bank and Gaza, including over telecommunications. Although Israel upgraded to 4G in 2013 and has since begun building super-fast 5G networks in urban centers, Palestinian companies still use 3G networks, which they received in 2018.

In Gaza, Israel has only permitted 2G networks to operate within the enclave, which is ruled by Hamas terrorists.

Although Israel first gave the Palestinians the 4G approval in November, the Communications Ministry set the next high-level meeting of Israeli and Palestinian communications officials for six months later. 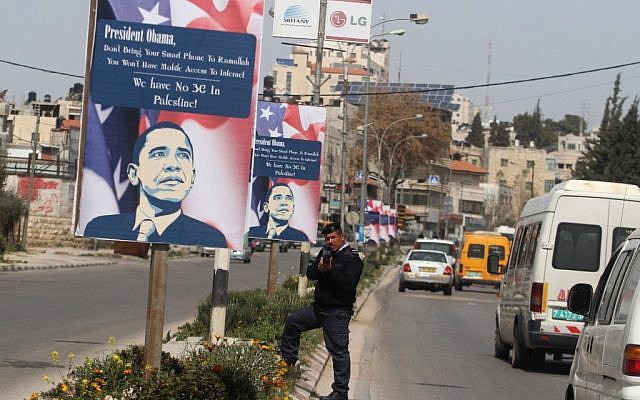 A Palestinian policeman stands next to a poster informing then-US president Barack Obama, ‘We have no 3G in Palestine,’ in the West Bank city of Ramallah in 2013. (Issam Rimawi/Flash90/File)

When the two teams finally met on April 26, the Israeli side offered relatively few 4G frequencies to the PA, far less than what international observers have assessed the Palestinian sector needs, officials told The Times of Israel.

In accordance with an independent study done by the United Nations, the Palestinian Authority team asked for about 90 megahertz of cellular frequencies in the West Bank so as to establish a viable 4G network.

Israeli officials justified the low number by saying there simply was not enough spectrum left for the Palestinians, officials involved in the negotiations said.

“The international community was shocked by this offer. It was even less than what Israel offered back in 2020, which was also unacceptable to the Palestinians…Things are going in reverse,” said one official familiar with the matter.

“This is far from enough for a good deployment of 4G systems in Palestine,” the official added.

At the same time, Communications Minister Yoaz Hendel, a staunch supporter of the Israeli settlement movement, has moved to dramatically expand Israeli cellular coverage in the West Bank, calling it “practical sovereignty.”

“From my point of view, Judea and Samaria are to be treated the same as any town in Israel. There is no difference between Netanya and the Jordan Valley, between Revava and Kibbutz Kabri,” Hendel told journalists at a briefing last year, citing places on both sides of the Green Line.

But cellular frequencies are a finite resource. Observers are concerned that as Israel hands more and more West Bank spectrum to Israeli companies, little will be left for Palestinian cellular providers.

“At the same time as they say, ‘There’s no spectrum for the Palestinians,’ Israel is advancing more spectrum for Israeli companies in the area,” said the official familiar with the matter, with evident frustration.

Israeli officials refused or ignored Palestinian requests to hold more frequent meetings to resolve the technical impasse. The next meeting is scheduled for early June.

“They are using delaying tactics, plain and simple,” said a second official familiar with the ongoing negotiations.

“At the beginning, I was optimistic that they were going to finally issue a 4G license. But after these offers, I don’t think they’re serious at all. They’re just trying to delay,” the official said. 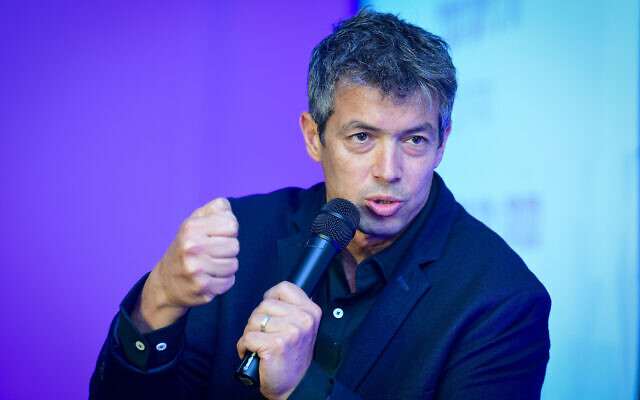 The Israeli Communications Ministry declined to respond to any of the allegations or allow key Israeli officials to be interviewed.

Israeli cellphone companies operate widely in the West Bank, and coverage reaches into most Palestinian areas. Many Palestinians use Israeli cell networks, which are both cheaper and provide faster service, rather than stick with their slower Palestinian counterparts.

Israeli networks are meant to service West Bank settlements without impinging into Palestinian Authority areas, according to agreements between the two sides. But on the ground, Israeli cellular signals often reach deep into Palestinian cities.

According to the World Bank, the Palestinian economy lost between $436 million and $1.5 billion between 2013 and 2015, due to Israeli carriers “siphoning off” Palestinian customers, or around 30 percent of the total Palestinian cellular market.

United States officials have repeatedly emphasized that the 4G update for the Palestinians is a key priority. At a November confab of donor countries to the PA, US envoy Hady Amr expressed hope that the 4G deal could be completed “as fast as possible.”

During a March briefing with the left-wing Americans for Peace Now group, US Ambassador to Israel Thomas Nides vowed to push the matter in talks with the Israelis.

“Who the hell has 3G? It’s ridiculous,” Nides said in March ahead of a dinner meeting with Hendel.

The American envoy added that he would be “pounding the table about the importance of every Palestinian having the same 4G or 5G on their phones.”

We’re really pleased that you’ve read X Times of Israel articles in the past month.

That’s why we started the Times of Israel ten years ago – to provide discerning readers like you with must-read coverage of Israel and the Jewish world.

So now we have a request. Unlike other news outlets, we haven’t put up a paywall. But as the journalism we do is costly, we invite readers for whom The Times of Israel has become important to help support our work by joining The Times of Israel Community.

For as little as $6 a month you can help support our quality journalism while enjoying The Times of Israel AD-FREE, as well as accessing exclusive content available only to Times of Israel Community members.

Thank you,
David Horovitz, Founding Editor of The Times of Israel

Already a member? Sign in to stop seeing this