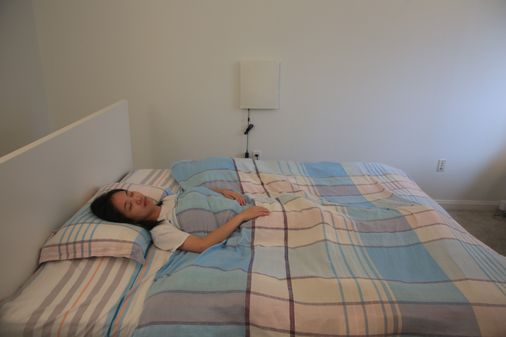 Parkinson’s causes impaired balance and uncontrollable body tremors. But the disease is usually present long before these symptoms appear. “It starts sometimes 5 to 10 years earlier than the motor symptoms,” said Dina Katabi, the MIT electrical engineering professor who led the project. “The brain is already drastically damaged.”

But since doctors can’t spot the disease by taking samples of body fluids or tissues, they usually can’t recognize Parkinson’s until the damage is done.

James Parkinson, the British scientist who made the first study of the disease in 1817, noticed that some patients experienced changes in respiration. Katabi and her team decided to see if breathing patterns could reveal the disease.

Working with MIT students as well as researchers at Rutgers University, the University of Rochester Medical Center, the Mayo Clinic, Massachusetts General Hospital, and Boston University, they collected breathing data from people as they slept. About 750 of the test subjects had Parkinson’s, while about 7,000 didn’t. The data was used to train an AI algorithm to detect the subtle differences in the breathing of the Parkinson’s patients versus the control group.

When the AI software was used to analyze nighttime breathing data from a different group of test subjects, the software correctly identified those with Parkinson’s 89 percent of the time.

“It’s a novel approach to a problem that many people have been trying to tackle,” said neuroscientist James Beck, chief scientific officer of the Parkinson’s Foundation.

The breathing data can be obtained with a belt that’s wrapped around a patient’s chest to detect expansion and contraction of the lungs. But the MIT researchers created a system that doesn’t require the user to wear anything. It’s a device that transmits low-powered radio waves throughout a patient’s bedroom, then intercepts the reflected signals much like a radar set.

The system is capable of detecting the chest movements of a sleeping person, even if they’re under a blanket or lying on their side. It uses software to filter out all other extraneous information, until only the breathing data remains. Using it for just one night provides enough data for a diagnosis, according to the study.

To be tested for Parkinson’s, a person would plug in the device, connect it to the household Internet, and go to bed. It would collect a night’s worth of breathing data and transmit it to the doctor’s office for analysis.

Beck said such a device would make it far easier for doctors to monitor Parkinson’s patients. “We have an elderly population for Parkinson’s disease,” he said, “and you can’t bring them into the clinic every day.”

Katabi said the technology could also radically speed up research into new treatments for Parkinson’s. It typically takes years to determine whether a Parkinson’s drug is doing any good. But the new system could provide answers much faster, she said, and some of the technology is already being used in clinical trials.

Intel Unison Promises to Meld Your Android, iOS Devices With Your PC Experience