To light Microsoft is tentatively extending Azure Virtual Desktop to Azure Stack HCI, so if you want to host remote Windows desktops on your own on-premises equipment using this service, you can.

While Windows 365 is a per-user VM designed for easy installation and billed monthly regardless of usage, AVD is a more flexible but complex service, offering pooled desktops and the ability to scale up or down as needed.

One notable feature is the license: AVD is the only environment that allows multi-session Windows 10 or 11, a license that comes with most Microsoft 365 subscriptions, starting at Business Premium, currently $20 per user per month in the US . Organizations also have to pay for the virtual infrastructure to run AVD, but the cost savings over Windows 365 can be significant.

At this month’s Ignite conference, Microsoft introduced a new variant of AVD, giving customers the ability to run it on Azure Stack HCI.

Azure Stack HCI means that the customer purchases and operates the hardware and purchases the host software through an Azure subscription, starting at $10.00 per physical core per month. From there, the license is an odd combination of traditional Windows licenses — required to activate Windows Server 2019 or 2022 in VMs, for example — and services purchased from Azure, such as the Azure Kubernetes service, which has special pricing for this scenario.

The rationale for Azure Stack HCI includes data sovereignty and low-latency connections to other on-premises systems, while also getting some of the management benefits of Azure, especially when combined with Azure Arc, which allows resources to be managed through Azure.

It is of course already possible to deploy Windows virtual desktop infrastructure on Azure Stack HCI and this is specifically documented here. So why bother with AVD?

One reason, albeit an artificial one, is that using Windows 10 or 11 allows multi-session. Second, it can be cheaper than an RDS implementation, although it’s difficult to be sure: the documentation for AVD on Azure Stack HCI states that the same licensing model is used as for cloud AVD, but that there is an additional “Azure Virtual Desktop hybrid service fee.” This fee requires you to pay for each active virtual CPU (vCPU) of Azure Virtual Desktop session hosts that you run on Azure Stack HCI. This fee will become active once the preview period ends.”

The amount of this compensation is not yet known.

AVD on Azure Stack HCI is managed from Azure, although there are some complications. For example, to add a VM to a host pool, the VM must be created separately from the AVD console, perhaps using a local tool like Windows Admin Center, and then connected to AVD by registering it and adding an agent add. Judging by this video, it’s a bit of a manual process at the moment, but also scriptable, and will probably get smoother as the preview progresses. Azure Arc also comes into play, with AVD on Azure Stack HCI coupled with Arc, enabling full management and monitoring from Azure.

There are several limitations in this public preview, which Microsoft warns that “certain key Azure Virtual Desktop features are not currently supported. Due to these limitations, we do not yet recommend using this feature for production workloads.”

Limitations include the inability to automate session host scaling, no support for starting a VM on connection, and no support for remote users. Microsoft also notes that “when connecting to a Windows 10 or 11 Enterprise multi-session virtual desktop, users may see activation issues, such as a desktop watermark that says ‘Activate Windows’, even if they have an eligible license.” Sweet.

Can customers apply AVD licenses to other on-premises infrastructure? No, says the FAQ, it’s only for “session hosts with Azure Stack HCI infrastructure”.

There seem to be two things going on here. One is that Microsoft’s hybrid story is getting richer, with more ways to centralize management and control in the cloud. The other is that Microsoft is using its licensing policies and exclusive features to push customers toward more subscription-based computing, also tied to Microsoft 365 and Azure. 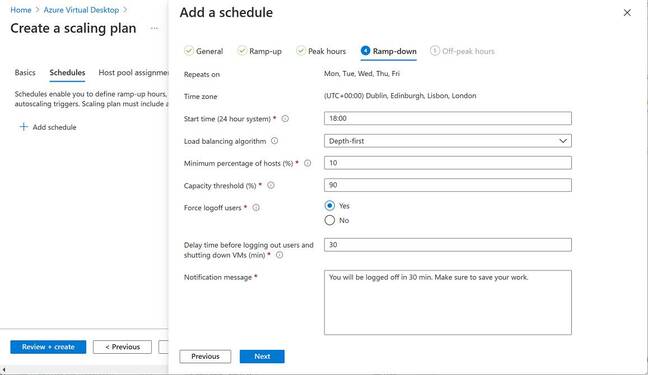 What the autoscale feature in Azure Virtual Desktop looks like

On Ignite, Microsoft also previewed a new autoscaling feature for AVD, on Azure itself, that provides an easy way to set up schedules for automatically adding and removing session hosts from a pool. The automatic scaling is partly based on planning and partly on capacity. For example, “if you choose 60 percent for a host pool that can handle 100 sessions, autoscaling will only enable additional hosts if the host pool has more than 60 sessions,” we were told.

The system does not create or delete VMs, but can boot and shut them down to save costs and resources. ®