Last month, Microsoft was testing the ability to sync PWAs in Microsoft Edge. That feature has not yet reached general availability but in a recent Microsoft Edge Canary build release, Microsoft has started testing a “Web App Sidebar,” as spotted by the folks at Neowin.

The Web App Sidebar is essentially a feature that is in place to provide easier access to web searches. However, it does not come automatically enabled and is hidden behind the “#Edge-webapp-sidebar” flag, indicating that Microsoft is still running tests to determine its effectiveness and efficiency.

Yet as Reddit user, Leopeva64-2 discovered, based on the description provided in Edge’s flags when searching for this new feature, folks stand to benefit a great deal. When the sidebar is enabled and open, you can simply type text into the sidebar’s search field, and grab relevant web links, just like Bing. 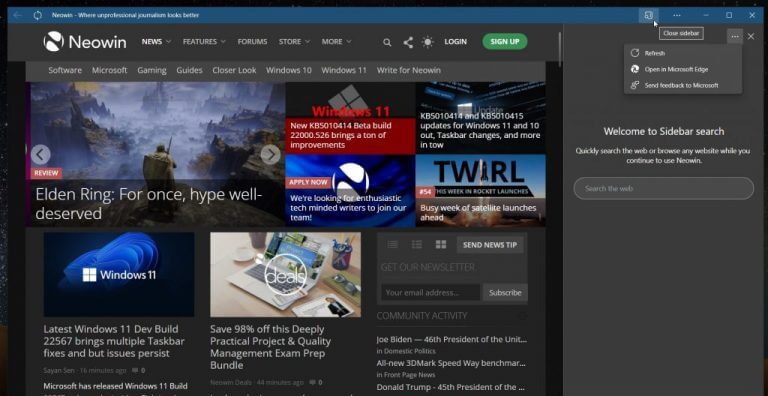 As if that wasn’t cool enough, Microsoft is also testing a new full-screen mode button for Edge that aims to improve PDF viewing for users. Also in testing since December is a “Performance Detector” feature, which can help you see your resource usage, performance issues, and give you actions to improve overall performance.

No word yet on when these features will come to the Stable version of the browser, but it could come in a few weeks. As usual, Microsoft needs to complete testing with Edge Insiders first and gather the respected feedback.

Update: An earlier version of this post stated that Performance Detector was a new feature. We’ve clarified that it’s been around since December. Thanks, @Leopeva64 for the correction!