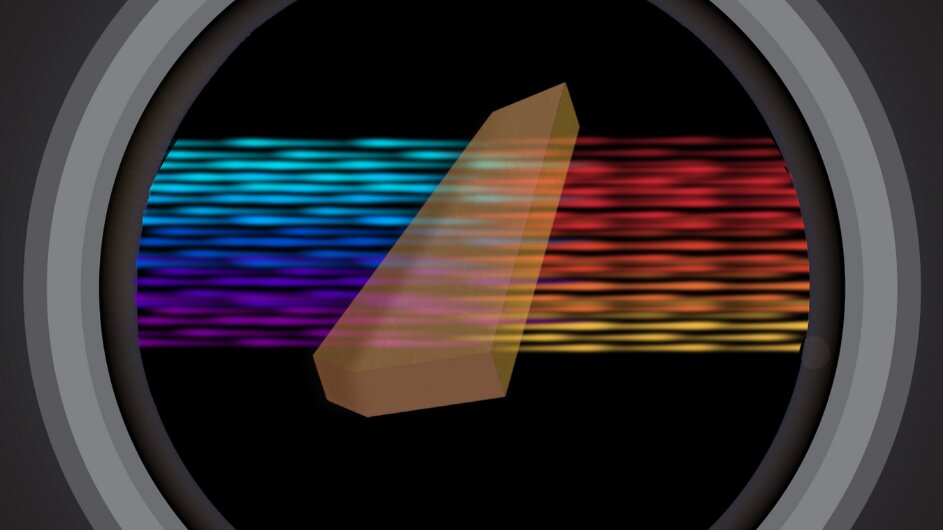 Lasers are everywhere. Devices that use them transmit information and enable the existence of long-distance communications and the internet; they aid doctors performing surgeries and engineers manufacturing advanced tools and technologies; and day-to-day, we encounter lasers as we scan our groceries and watch DVDs. “In the 60-some years since they were invented, lasers have absolutely transformed our lives,” said Giulio Cerullo, a nonlinear optics researcher at Politecnico di Milano in Italy.

Today, with the help of new research from Cerullo and collaborators at Columbia University published in Nature Photonics, devices that use lasers are poised to become a whole lot smaller.

This new research is a first step toward replacing the standard materials used in today’s tunable lasers, which are measured in millimeters and centimeters, said Trovatello, who recently completed her Ph.D. with Cerullo in Milan. “Nonlinear optics is currently a macroscopic world, but we want to make it microscopic,” she said.

Lasers give off a special kind of coherent light, which means all the photons in the beam share the same frequency and thus, color. Lasers operate only at specific frequencies, but devices often need to be able to deploy different colors of laser light. For example, a green laser pointer is actually produced by an infrared laser that’s converted to a visible color by a macroscopic material. Researchers use nonlinear optical techniques to change the color of laser light, but conventionally used materials need to be relatively thick for color conversion to occur efficiently.

MoS2 is one of the most studied examples of an emerging class of materials called transition metal dichalcogenides, which can be peeled into atomically thin layers. Single layers of MoS2 can convert light frequencies efficiently, but are actually too thin to be used to build devices. Larger crystals of MoS2, meanwhile, tend to be more stable in a non-color converting form. To fabricate the necessary crystals, known as 3R-MoS2, the team worked with the commercial 2D-material supplier HQ Graphene.

With 3R-MoS2 in hand, Xu began peeling off samples of varying thickness to test how efficiently they converted the frequency of light. Right away, the results were spectacular. “Rarely in science do you start on a project that ends up working better than you expect—usually it’s the opposite. This was a rare, magical case,” remarked Schuck. Usually, special sensors are needed to register the light produced by a sample, and it takes some time for them to do so, explained Xu. “With 3R-MoS2, we could see the extremely large enhancement almost immediately,” he said. Notably, the team recorded these conversions at telecom wavelengths, a key feature for potential optical communications applications, such as delivering internet and television services.

In a fortunate accident during one scan, Xu focused on a random edge of a crystal and saw fringes that suggested waveguide modes were present inside the material. Waveguide modes keep different color photons, which otherwise move at different speeds across the crystal, in sync, and can possibly be used to generate so-called entangled photons, a key component of quantum optics applications. The team handed their devices off to the lab of physicist Dmitri Basov, where his postdoc Fabian Mooshammer confirmed their hunch.

Currently, the most popular crystal for waveguided conversion and generating entangled photons is lithium niobate, a hard and stiff material that needs to be fairly thick for achieving useful conversion efficiencies. 3R-MoS2 is equally efficient but 100 times smaller and flexible enough that it can be combined with silicon photonic platforms to create optical circuits on chips, following the trajectory of ever-smaller electronics.

With this proof-of-concept result, the bottleneck toward real-life applications is large-scale production of 3R-MoS2 and high-throughput structuring of devices. There, the team says, industry will need to take over. With this work, they hope they’ve demonstrated the promise of 2D materials.

“I’ve been working on nonlinear optics for more than thirty years now. Research is most often incremental, slowly building on what came before. It’s rare that you do something completely new with big potential,” said Cerullo. “I have a feeling that this new material could change the game.”

This document is subject to copyright. Apart from any fair dealing for the purpose of private study or research, no
part may be reproduced without the written permission. The content is provided for information purposes only.