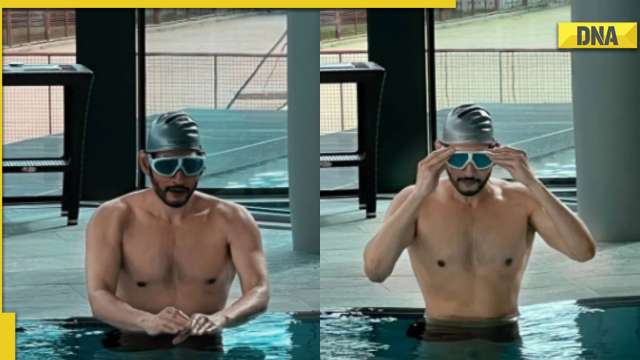 Have you ever drooled at Mahesh Babu’s fit physique and chiselled body? To add more to your imagination, take a look at this latest photo of the superstar shared by his wife Namrata Shirodkar! Doesn’t he look like he is coming straight from a calendar shoot?

In the photo, or as Gen Z says – a thirst-trap photo, the actor is seen flaunting his fit and chiselled body as he enjoys a good swimming session at his private pool in his house. Namrata shared two photos on Instagram and wrote, “Some Saturday mornings are like these….” followed by the hashtag #toocoolforthepool. He has set social media on fire, and we don’t complain!

Recently on the occasion of Mahesh’s birthday, his wife shared a sweet note for him. “You light up my world like nobody else! Happy birthday MB @urstrulymahesh!! Here are too many more crazy years together!! Love you, now and always,” Namrata wrote.

The couple also shared many photos together from their month-long vacation in the US and Europe. Namrata and Mahesh met on the sets of their movie Vamsi in 2000 and later began dating. They got married in February 2005 during the shooting of Athadu.

The duo has two children – Sitara Ghattamaneni and Gautham Ghattamaneni. Meanwhile, on the work front, Mahesh Babu was last seen in the hit Telegu film Sarkaru Vaari Paata. The movie also starred Keerthy Suresh and was directed by Parasuram Petla.

It was released in theatres on May 12. In the film, Mahesh played the role of a US-based money lender, who travels to India for personal reasons. But, as the story proceeds further, he is drawn into a woman’s life, who has suffered from the nexus between politicians and banking officials. He then takes a pledge to help the woman and ends up fixing the banking system in the country.

The film wasn’t received well by critics and didn’t do expected business at the box office either. However, it did manage to be a profitable one, owing to Mahesh Babu’s stardom. Mahesh Babu will soon be seen sharing the big screen with Pooja Hedge in Jana Gana Mana.

The ‘Bear-raid’ siren gone from Soldier Field via gameday changes

In a new paper, Meta researchers demonstrated a system that can reconstruct a user’s plausible pose from only the Quest 2’s sensors using reinforcement learning (David Heaney/UploadVR)

How to Turn On the Flashlight on Android