Liteboxer is the next contender in the VR fitness ring – TechCrunch


If virtual reality social gatherings aren’t your cup of tea, we don’t blame you. But it’s hard to deny that putting on an immersive headset and punching stuff sounds kind of fun.

Since its founding in 2017, Liteboxer has been like Peloton for boxing — you use in-home hardware to get a unique, music-based workout with help from coaches, though at a price point of at least $1495, Liteboxer isn’t cheap. Now, Liteboxer is trying to make its product more accessible by unveiling Lightboxer VR, which debuts today on the Meta Quest 2 for users in the US, Canada, Mexico and the UK

“We’ve worked on the VR product for more than two years, so it’s not something like, ‘Oh, Facebook changed their name to Meta, let’s jump in,’ said CEO and co-founder Jeff Morin. “I think VR will really allow us to try new things out and reach new users.” 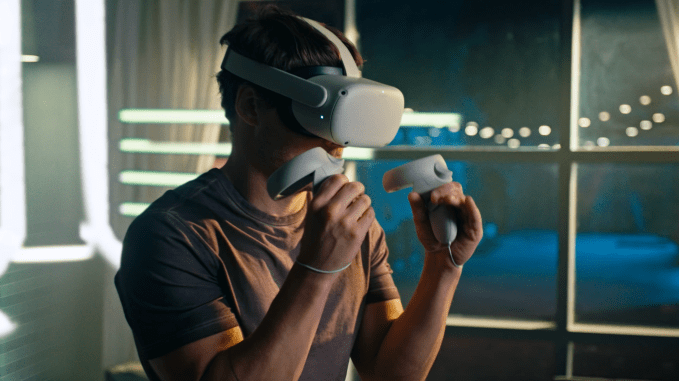 Liteboxer VR costs $18.99 per month (plus a few hundred dollars for a headset, if you don’t already have one) — that still might be a price barrier for some consumers, but it’s surely an easier on-ramp than spending $1495, especially when you consider the cost of a gym membership in lieu of at-home fitness. Immediately upon logging in for the first time, you’re greeted with a brief overview on how to box safely from one of the coaches. There’s only so much you can teach in a few minutes, but in trainer-led classes, which range from 10 to 45 minutes, you can watch coaches properly demonstrate their technique while you box along.

The interface resembles Liteboxer’s physical hardware — you’re punching along with moving lights that travel across six different targets. So far, Liteboxer VR has over 500 workouts, including 400 trainer-led classes and 100 Punch Tracks, which are on-demand songs from Universal Music’s catalog with pre-programmed patterns for you to punch to the beat. There’s something special about boxing along with “Brutal” by Olivia Rodrigo, and clearly, we weren’t the only ones excited about the Olivia Rodrigo tracks — one Liteboxer user went viral on TikTok punching along to “Good for You.” Liteboxer said that when three user-generated Liteboxer videos went viral during the same week, the company saw a 209% increase in sales. Now, Liteboxer has 245,000 TikTok followers, which led to a 40% sales increase and a 20x growth in site traffic, the company told TechCrunch. The company declined to share concrete sales numbers, though Liteboxer raised a $20 million Series A round less than a year ago.

“All the server side stuff, the music side, the Punch Track programming… That’s all shared between the VR and the hardware,” Morin said. “So we’re lucky in the sense that we set it up in a good way that we don’t have to duplicate all our efforts there.”

VR fitness is a growing market — in October, Meta acquired Within, creators of the VR fitness app Supernatural, for more than $400 million (but, the FTC is probing that deal for potential antitrust violations). Supernatural is one of the leading VR fitness programs on the Meta Quest 2, and it costs about the same as Liteboxer VR at $19.99 per month. Supernatural also offers boxing workouts, in addition to dance-like “flow” workouts, stretching and meditation, but for boxing devotees, the variety of different boxing workouts on Liteboxer VR is likely to keep you entertained. 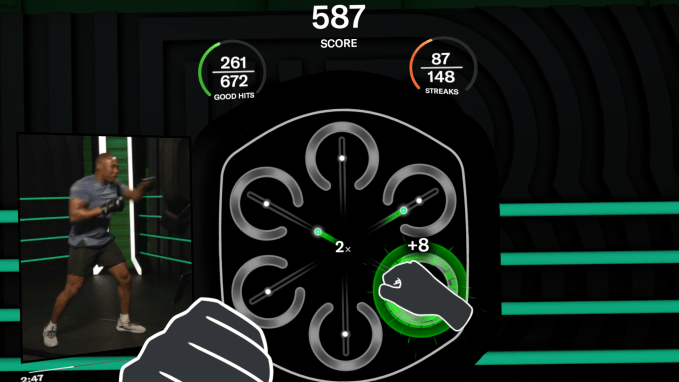 One small, yet important difference between Liteboxer VR and Supernatural is that Liteboxer VR displays how many calories you burned. Some consumers might want to track this data, but for others, the implicit emphasis on weight loss may take you out of the fun of the program (and really, do I need to know how many calories I burned while boxing along to a two- minute Olivia Rodrigo track?).

Already, Liteboxer VR is planning to add new features to the app that will further differentiate it from its competitors.

“If you use the hardware, we have head-to-head challenges, so you can look up a user and challenge them directly. That will be getting added to VR,” Morin told TechCrunch. He added that Liteboxer VR is recording green screen content with the trainers, which is supposed to make it appear as though the trainer is boxing along with you. “It looks like you’re standing with [the trainer.] He’s right in front of you. You’re punching the combo that he’s calling out.”

Morin said that these features are expected to come to Liteboxer VR in the coming weeks.

Based in Boston, Liteboxer currently employs around 40 full-time employees, in addition to 15 to 20 contractors, who mostly work on the production of Liteboxer videos. Morin calls the company “a pretty lean and mean team,” but says that after the company raises its Series B, it hopes to grow its staff.