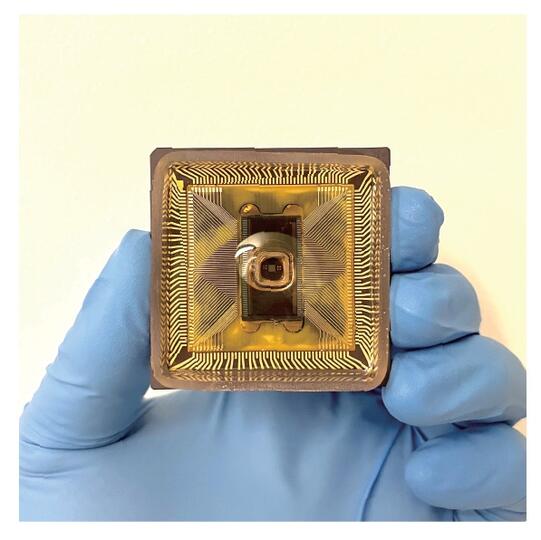 Working with biotech start-up DNA Script, they designed an ionic transistor which consists of an aqueous solution of quinone molecules, interfaced with two concentric ring electrodes with a centre disc electrode (see photo).

The ring electrodes electrochemically lower and tune the local pH around the centre disc by producing and trapping hydrogen ions.

A voltage applied to the centre disc causes an electrochemical reaction which generates an ionic current from the disk into the water.

The reaction rate can be sped up or down by tuning the local pH – increasing or decreasing the ionic current – allowing pH value to be used as a ‘gate’ to control current flow, and creating an ionic parallel to the electronic field effect transistor.

Hundreds of pH-gated ionic transistors were built on the same substrate, arranged so that disk current would be an analogue arithmetic multiplication of the disk voltage and the local pH value.

A 16 x 16 array of similar ionic transistors became an analogue matrix multiplyer, with all the different local pHs storing a weight matrix for the equation. 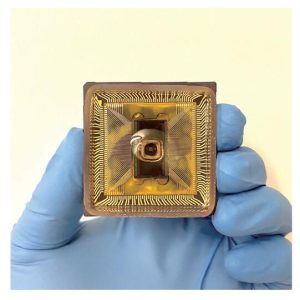 “Our ionic circuit performs the matrix multiplication in water in an analogue manner that is based fully on electrochemical machinery,” said Harvard researcher Woo-Bin Jung. “Matrix multiplication is the most prevalent calculation in neural networks for artificial intelligence.”

“So far,” continued Jung, “we have used only three or four ionic species, such as hydrogen and quinone ions, to enable the gating and ionic transport in the aqueous ionic transistor. It will be very interesting to employ more diverse ionic species and to see how we can exploit them to make rich the contents of information to be processed.”

The research is published in Advanced Materials.