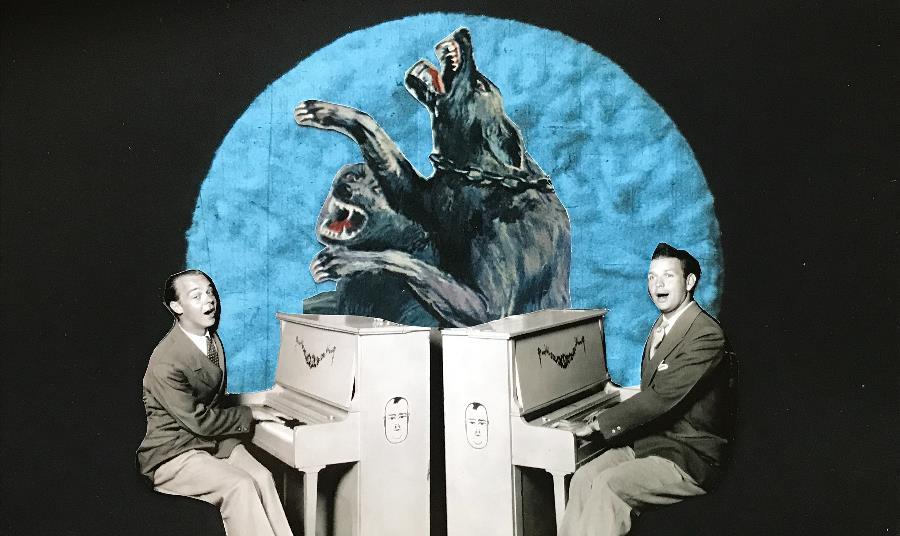 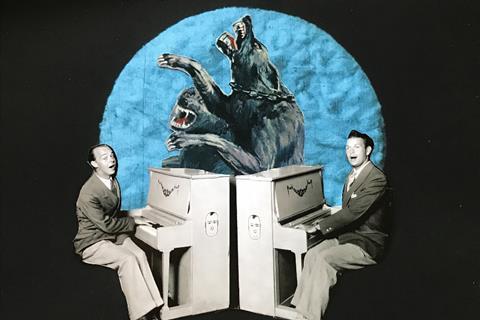 A 20-minute immersive experience commissioned by the festival, German production Haunted Hotel will play at the BFI Southbank throughout the festival, and until October 30. It will use clippings from Maddin’s personal archive in “a surreal paper world”; viewers will look through virtual peep holes and “rooms filled with longing, hysteria and madness”, in what the festival describes as a rumination “on the manifold permutations of desire, deception and death.”

Scroll down for the full list of LFF Expanded projects

It is one of 20 projects in the LFF Expanded selection, of which five are world premieres, seven are international premieres and seven are UK premieres. The projects hail from 17 countries; 17 of the projects will play at LFF Expanded @ 26 Leake Street in London, with the Southbank and National Theatre hosting additional works.

“I’ve long told myself that collage-making is good for keeping my eye sharp for film shoots,” said Maddin. “The snipper and gluer of papery things arranges those things in a frame, just like a director — pure mise-en-scène!

“But making collages in Augmented Reality truly is a brain-breaker, another experience completely, with its multiple layers of interest aspiring to draw the viewer ever inward, free-floating non-sequiturs that suggest causal connections and conceal vile secrets, the whole creating an atmosphere thick with uninhibited urges — lustful, homicidal, stupid!”

Canadian filmmaker Maddin has worked extensively across feature and extended reality film; his titles in the former category include 2003 drama The Saddest Music In The World, based on a screenplay by Kazuo Ishiguro.

The Expanded programme will also feature the works of filmmakers moving into the XR space.

UK filmmaker Charlie Shackleton will play his virtual reality live performance As Mine Exactly – a journey into his late childhood and the upsetting events that defined it, centring on his mother’s medical condition. The 30-minute film is played through a virtual headset, with one viewer at a time.

Shackleton has previously made documentaries including Beyond Clueless and The Afterlight, the latter of which has been on an international tour of its single print this summer.

US filmmaker, artist and performer Wu Tsang will present the UK premiere of A Mighty Mass Emerges, her first VR work, which invites audiences to observe the marine world from the perspective of a whale. The 13-minute film is a follow-up to Tsang’s digital art installation Of Whales, which participated in the Venice Biennale 2022; Tsang previously directed feature film and orchestral piece Moby Dick; or, The Whale, also this year.

Two of the LFF Expanded projects have been backed through the BFI Film Fund: Darren Emerson’s In Pursuit Of Repetitive Beats, in which viewers search for an illegal rave in Coventry in 1989; and immersive documentary On The Morning You Wake (To The End Of The World), based on texts by Hawaiian pet Jamaica H. Osorio.

An Immersive Art and XR award will be announced at the virtual LFF awards ceremony on Sunday October 16.

The programme “highlights the enormous diversity and vibrancy of the ever-growing international immersive and expanded realities scene, from high-profile international filmmakers who are experimenting with new technologies, to new works from some of the most exciting emerging talent in the field”, according to LFF Immersive Art and XR Curator Ulrich Schrauth.

How to Turn On a PS4

Doing College in Metaverse is a Dead-end! 5 Challenges are the Proof – Analytics Insight