To say that Big Tech controls the Internet may seem like an exaggeration. Increasingly, in at least one sense, it is literally true.

The internet can seem elusive, a post-physical environment where things like viral messages, virtual goods and metaverse concerts just happen. But creating that illusion requires a truly gigantic – and fast-growing – web of physical connections.

Fiber optic cable, which carries 95% of the world’s international Internet traffic, connects virtually all of the world’s data centers, those huge server warehouses that house the computing that transforms all those ones and zeros into our experience of the Internet.

Where those fiber links connect countries across the oceans, they consist almost entirely of cables running under water — some 1.3 million kilometers (or more than 800,000 miles) of bundled glass wires that make up the actual, physical international internet. And until recently, the vast majority of submarine fiber optic cable installed, controlled and used by telecommunications companies and governments. Today that is no longer the case.

In less than a decade, four tech giants — Microsoft,

Google’s parent company, Alphabet, Meta (formerly Facebook), and Amazon, have become by far the dominant users of submarine cable capacity. Before 2012, the share of submarine fiber capacity used by these companies was less than 10%. Today, that figure is about 66%.

And these four are just getting started, say analysts, submarine cable engineers and the companies themselves. Over the next three years, they are on track to become primary financiers and owners of the web of undersea Internet cables connecting the wealthiest and most bandwidth-hungry nations on the shores of both the Atlantic and Pacific Oceans, according to undersea cable analytics firm. TeleGeography.

By 2024, the four are expected to have joint ownership interests in more than 30 long-distance submarine cables, each up to thousands of miles in length, connecting every continent in the world except Antarctica. In 2010, these companies had an ownership stake in only one such cable: the Unity cable, which is partially owned by Google, and which connects Japan and the US.

Traditional telecom companies have responded with suspicion and even hostility to technology companies’ increasingly predatory demands for the world’s bandwidth. Industry analysts have expressed concern about whether we want the world’s most powerful Internet service providers and marketplaces to take ownership of the infrastructure on which they all are delivered. This concern is understandable. Imagine if Amazon owned the roads it delivered packages on.

But the involvement of these companies in the cable-laying industry has also lowered the cost of transmitting data across the oceans for everyone, even their competitors, and helped the world increase the capacity to transmit data internationally by 41% in 2020 alone. increase, according to TeleGeography’s annual report on submarine cable infrastructure. 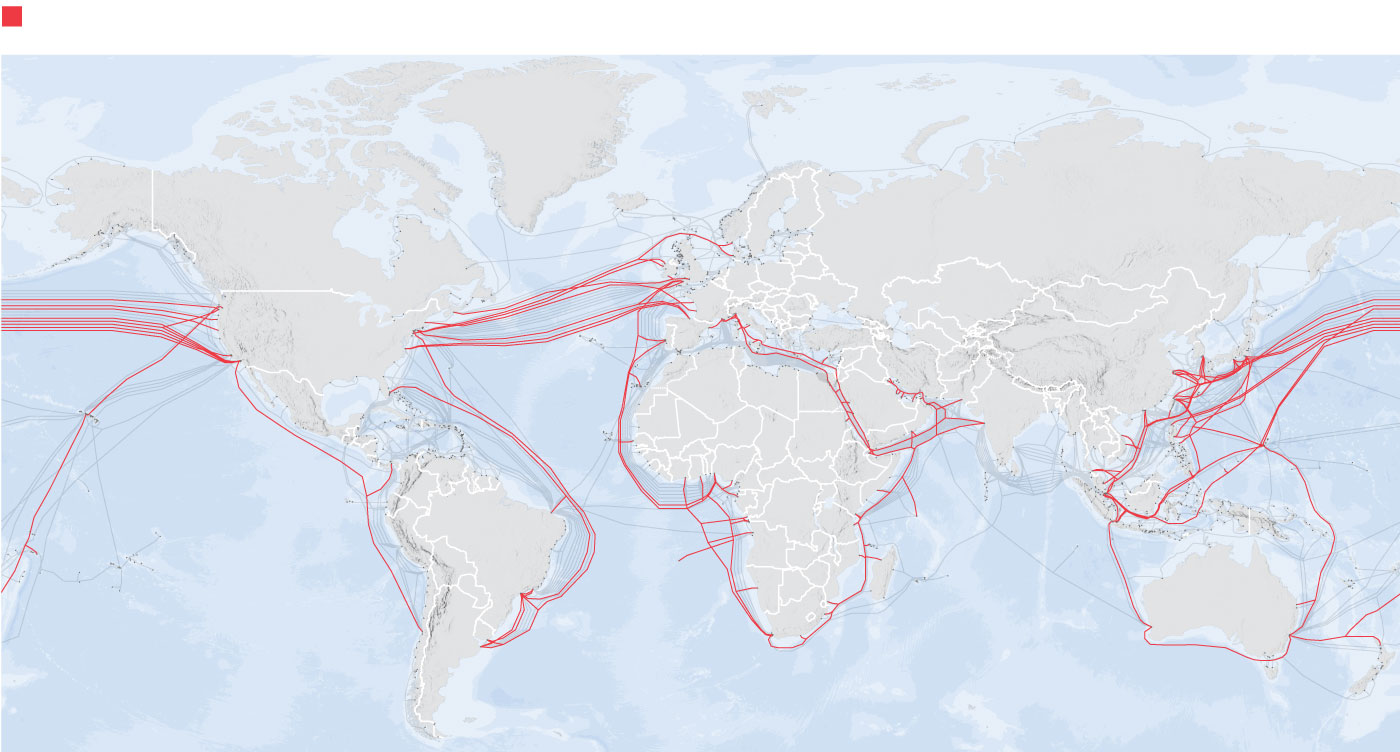 Cables Amazon, Google, Meta or Microsoft have an ownership interest in

Microsoft has an ownership interest in

Microsoft has an ownership interest in

Submarine cables can cost hundreds of millions of dollars each. Installing and maintaining them requires a small fleet of vessels, from surveying vessels to specialized cable-laying vessels deploying a variety of robust subsea technology to bury cables beneath the seabed. Sometimes they have to lay the relatively fragile cable – at some points as thin as a garden hose – to a depth of up to 6 kilometers.

All this must be done while maintaining the right amount of tension in the cables and avoiding hazards as diverse as seamounts, oil and gas pipelines, high voltage transmission lines for offshore wind farms and even shipwrecks and unexploded bombs, says Howard Kidorf, managing partner at Pioneer Consulting, which helps companies design and build submarine fiber optic cable systems.

In the past, laying cables across the ocean often required the resources of governments and their national telecom companies. That’s anything but loose change for today’s tech titans. Combined, Microsoft, Alphabet, Meta, and Amazon spent more than $90 billion in capital expenditures in 2020 alone.

The four say they are laying all these cables to increase bandwidth in the most developed parts of the world and bring better connectivity to underserved regions like Africa and Southeast Asia.

That’s not the whole story. Their foray into submarine fiber construction was inspired by the rising cost of buying capacity on cables owned by others, but is now driven by their own insatiable demand for increasing terabytes of bandwidth, said Timothy Stronge, vice president of research at TeleGeography. This has cut profits for traditional players in the cable-laying industry such as NEC, ASN and SubCom, he adds. (It has done the same to the gains made by wholesalers of capacity on submarine cables, such as Tata and Lumen.)

By building their own cables, the tech giants save themselves money in the long run that they would have to pay other cable operators. That means the tech companies don’t have to operate their cables at a profit to make the investment financially meaningful.

Indeed, most of these Big Tech-funded cables are collaborations between rivals. The Marea cable, for example, which stretches approximately 6,100 miles between Virginia Beach in the US and Bilbao, Spain, was completed in 2017 and is partially owned by Microsoft, Meta and Telxius, a subsidiary of Telefónica.,

the Spanish telecom. In 2019, Telxius announced that Amazon had signed an agreement with the company to use one of eight pairs of fiber optic wires in that cable. In theory, that’s one-eighth of the capacity of 200 terabits per second, enough to stream millions of HD movies at once.

Meta works with global and local partners on all of its submarine cables, as well as other major technology companies such as Microsoft, said Kevin Salvadori, vice president of network infrastructure at the company.

Sharing bandwidth among competitors helps ensure each company has capacity on more cables, redundancy essential to keep the internet buzzing in the world when a cable is cut or damaged. That happens about 200 times a year, according to the International Cable Protection Committee, a non-profit organization. (Repairing damaged cables can be a huge effort, requiring the same ships that laid the cable, and can take weeks.)

Sharing cables with ostensible competitors — as Microsoft does with its Marea cable — is key to ensuring its cloud services are almost always available, something Microsoft and other cloud providers explicitly promise in their agreements with customers, says Frank Rey, senior director of Azure network infrastructure at Microsoft.

But the structure of these deals also serves another purpose. Reserving capacity for telecom carriers like Telxius is also one way to prevent regulators from thinking that these US tech companies are telecoms themselves, says Mr. Stronge. Tech companies have argued in the press and in court for decades that they are not “regular carriers” like telcos — if they were, it would expose them to thousands of pages of regulation specific to that status.

“We’re not a carrier – we don’t sell anything of our bandwidth to make money,” says Mr. salvadori. “We are and will continue to be a big buyer of submarine capacity where it’s available, but in places where it’s not available and we need it, we’re pretty pragmatic, and if we need to invest to make it happen, we’ll do it, he adds.

There is an exception for large tech companies collaborating with rivals on the internet’s underwater infrastructure. Google, the only one of the major tech companies, already owns three different submarine cables, and that total will reach six by 2023, according to TeleGeography.

Google declined to disclose whether or not it has or will share capacity on any of those cables with another company.

Google built these cables and builds them solely under its ownership and control for two reasons, said Vijay Vusirikala, a senior director at Google responsible for all of the company’s submarine and terrestrial fiber infrastructure. The first is that the company needs them to make its own services, such as Google Search and YouTube streaming, fast and responsive. The second is to gain an edge in the battle for customers for its cloud services.

All of these ownership changes in the Internet’s infrastructure reflect what we already know about the dominance of Internet platforms by big tech, said Joshua Meltzer, a senior fellow at the Brookings Institution who specializes in digital commerce and data flows.

The ability of these companies to integrate vertically down to the level of the physical infrastructure of the Internet itself lowers their costs of delivering everything from Google Search and Facebook’s social networking services to Amazon and Microsoft’s cloud services. It also widens the moat between themselves and any competitors.

“You have to imagine that this investment will eventually make them more dominant in their industries as they can provide services at lower and lower costs,” said Mr. Meltzer.

Sign up for our weekly newsletter for more WSJ Technology analysis, reviews, advice and headlines.

write to Christopher Mims at christopher.mims@wsj.com