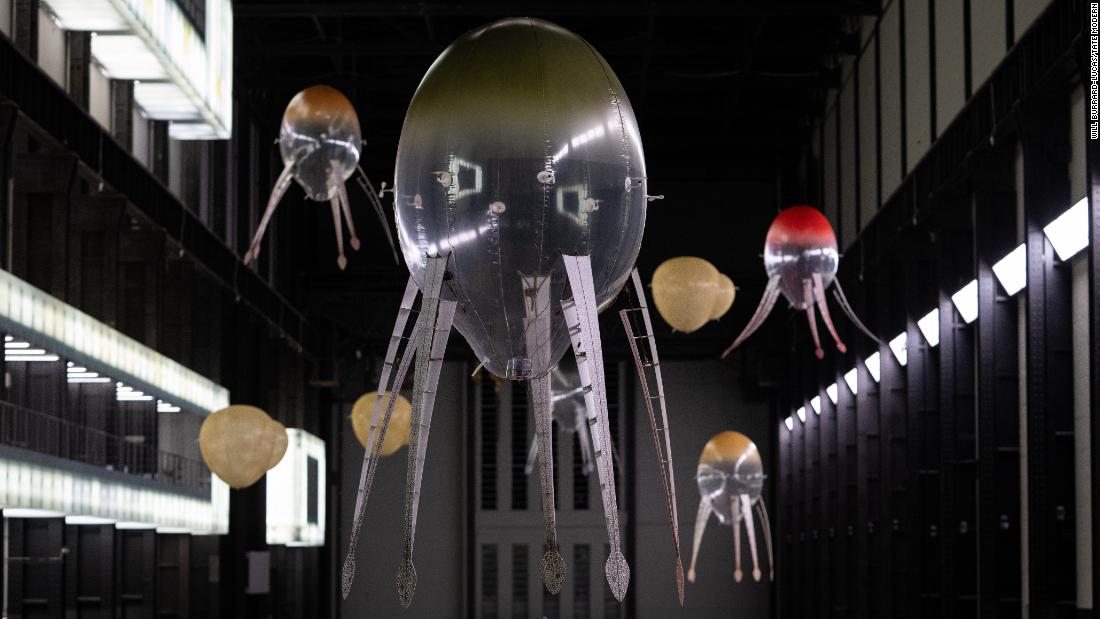 This article was originally published by The Art Newspaper, an editorial partner of CNN Style.

Two species of intelligent robots have moved into prime real estate on the Thames: Turbine Hall at Tate Modern. Collectively referred to as “aerobic,” the floating orbs that New York artist Anicka Yi created to inhabit cavernous space are called “planulae” (hairy and bulbous ones) and “xenogellated” (those with patterned tentacles). They make up the installation “Anicka Yi: In Love with the World”, which opened this week.

Inspired by ocean life forms and fungi, the helium-filled forms move using rotors and a small battery. Together, they create an “ecosystem” within the museum, Yi said in a press release, interacting with their surroundings and visitors, and displaying individual and group behaviors.

Behind the scenes, an incredible amount of technology and AI research is fueling this floating family. A team of specialists has developed the aerial vehicles using software that gives each a unique flight path. The software, called the artificial life program, generates a huge range of travel options for the orbs and therefore simulates the somewhat unpredictable processes of natural life. This type of technology is normally used in scientific studies, but has also been used to create realistic visual effects and animations.

The robots will react to the space and the people around them by receiving information from electronic sensors positioned around the site. The signals affect them individually and in groups so that they behave differently with each encounter.

“Like a bee’s dance or an ant’s scent trail, aerobes communicate with each other in ways we can’t understand,” described a Tate Modern statement.

As well as bringing machines – admittedly of an entirely different kind – to the empty stomach of Turbine Hall, the heart of the former Bankside power station, Yi also uses his aerobics to challenge ideas about the intelligence and our focus on the brain. as its main transmitter.

“Most AIs function like a mind without a body, but living organisms learn so much about the world through the senses,” she said. “The knowledge emerging from being a body in the world, engaging with other creatures and environments, is called physical intelligence. What if AI could learn through the senses? Could machines develop their own experiences of the world? Could they become independent from humans? Could they exchange intelligence with plants, animals and microorganisms? “

Installation view of “Anicka Yi: In Love With The World” at Tate Modern, London. Credit: Will Burrard-Lucas / Tate Modern

The other element of Yi’s work is the use of perfume: the artist has “sculpted” the air by creating what she describes as “scent landscapes”. A combination of smells emitted into space will change over the weeks of the commission, as will the behaviors of the robots in residence. Yi has selected scents inspired by the history of the Bankside district around the Tate Modern. These include sea scents from the Precambrian period (the oldest in Earth history), the smells of vegetation from the Cretaceous (around 145 to 66 million years ago), the scents of spices. used in hopes of fighting the Black Death in the 14th century, and the smell of coal and ozone from the Industrial Revolution.

Scents are meant to remind visitors of our connection to our environment and to each other. “Yi is interested in air policy and how it is affected by changing attitudes, inequalities and ecological awareness,” the museum statement read. “Space is not empty but filled with the air we all share and depend on.”

“Yi’s installations are unforgettable, using the latest scientific ideas and experimental materials in unexpected ways,” Frances Morris, director of Tate Modern, said in a press release. “The results not only engage the senses, but also address some of the big questions we face today about humanity’s relationship with nature and technology.”