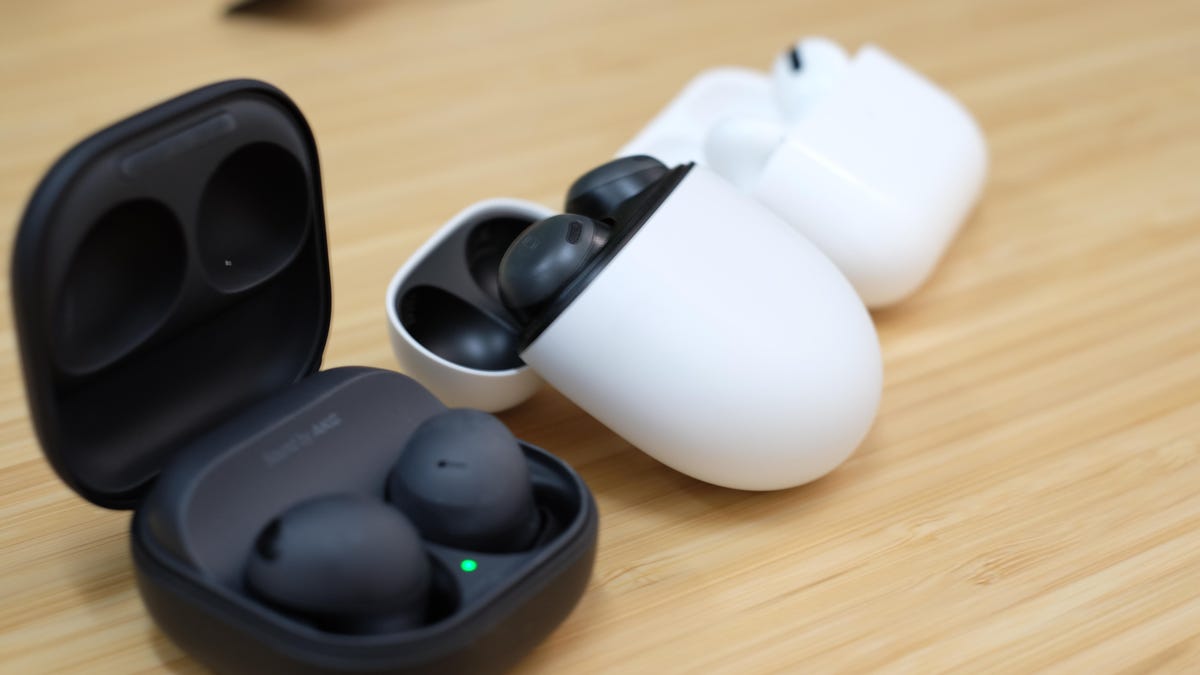 Samsung, Google, and Apple compete on many different fronts every single day. But more recently, the three tech giants have become competitors with one another when it comes to high-end wireless earbuds.

Samsung’s latest entry is the Galaxy Buds 2 Pro, while Google joined in on the fun with the Pixel Buds Pro, and Apple has long had the AirPods Pro. Each pair of wireless earbuds has its own features that sets it apart. For instance, the Buds 2 Pro have a voice detect feature that automatically lowers the volume of what you’re listening to once they detect that you’re talking. After a few seconds of silence from you, the volume reverts back to where it was.

With so many valid options for “pro” wireless earbuds, where does one begin? Well, thankfully, it’s my job to help you make an educated purchase based on what you need.

You should get the Samsung Galaxy Buds 2 Pro if…

1. You have a lot of Samsung devices

Samsung’s ecosystem of Galaxy products spans smartwatches, phones, tablets, and Windows computers. Even though they don’t carry the Galaxy name, I’d even lump Samsung’s televisions. With such a broad range of products, each one capable of playing audio, the Galaxy Buds 2 Pro are naturally integrated into each category.

With the Buds’ automatic switching, you’re able to easily switch the audio source streaming in the Buds 2 Pro from one Samsung device to another without doing anything more than pressing play on another device. For example, if you’re listening to a podcast on your Galaxy phone and you want to start watching a YouTube video on a Galaxy tablet, all you have to do is press play on the tablet and the earbuds automatically will switch their connection to the tablet and pause the podcast you were listening to on your phone.

Auto switching is a handy feature for the Buds 2 Pro, but it only works with Samsung devices.

2. You care about comfort above all else

The Galaxy Buds 2 Pro are by far the most comfortable wireless earbuds I’ve ever used. Normally when I test wireless earbuds there’s an adjustment period where my ears have to get used to the new buds. That often means taking breaks to ease into it to prevent my ears from becoming overly sore. With the Buds 2 Pro, however, I didn’t have to take any breaks during my entire time testing them. The included ear tips fit nicely into my ear, something I confirmed with the ear fit test, and the earbuds themselves were light enough it often felt like I wasn’t wearing earbuds at all.

I’ve heard that people who add comfort tips to the AirPods Pro have a similar experience. That is something I’ve admittedly not tried, but it requires spending a little extra on the tips. With the Buds 2 Pro, everything you need for a comfortable experience comes in the box.

You should get Google’s Pixel Buds Pro if…

1. You own a lot of different devices

Not just Google or Android devices, but even Apple and Windows devices. Why? Because the Pixel Buds Pro supports multipoint connections. That’s a fancy term that basically means you can have the Pixel Buds Pro connected to two different devices at the same time. And that’s true regardless of what company makes the devices involved.

For instance, during my testing of the Pixel Buds Pro, I often had them connected to a Pixel 6 Pro and a MacBook Air. I’d be streaming and listening to music on the MacBook Air’s connection, but once I received a call on the Pixel 6 Pro, the earbuds would automatically switch over to the phone for the call.

Multipoint isn’t as seamless or easy to use as Samsung’s or Apple’s auto-switching features, but the Pixel Buds Pro are the only wireless earbuds in this group that you can use with multiple devices regardless of the brands.

2. Battery life is the most important factor to you

Arguably, one of the headline features of the Pixel Buds Pro is the battery life. According to Google, and my own anecdotal experience seems to back it up, the Pixel Buds Pro can get up to seven hours of continuous listening with ANC on before the earbuds need to be recharged. If you add in the capacity of the charging case, that brings the total listening time to 20 hours with ANC on.

If you don’t need or like active noise cancellation, then you can get up to 11 hours of listening on a single charge, with a total of 31 hours of use before you need to charge the case and earbuds.

Those numbers put both Samsung’s Buds 2 Pro and Apple’s AirPods Pro to shame. And rightfully so.

You should get the Apple AirPods Pro if…

Part of what makes the experience of owning multiple Apple products so magical is how well they all work together. With the AirPods Pro, you pair them with a single device – let’s say an iPhone – and your AirPods are instantly linked to every Apple device that’s signed in using the same iCloud account. (To be clear, the same goes for the Pixel Buds with Android devices and the Buds 2 Pro with Samsung devices.)

But the seamless switching between all of your Apple devices when you’re watching a movie or listening to music is something that, so far, hasn’t been matched by Samsung. It’s close, but not quite the same.

AirPods Pro will automagically switch between your Apple Watch, iPhone, iPad, Mac and can even be used with the Apple TV.

There isn’t another pair of wireless earbuds that offers as seamless an experience across all of your Apple products outside of Apple’s AirPods lineup, including the AirPods Pro.

Also: I dropped my AirPods Pro into my coffee. What I did next saved me $250

2. Sound quality is your North Star

To my ears, the AirPods Pro offers the complete package when it comes to the total sound experience. From aggressive active noise cancellation that drowns out background noise to a transparency mode that lets in just enough of the ambient noise that it doesn’t interfere with your hearing every second of your favorite song or an overhead announcement.

Spatial Audio on the AirPods Pro is a feature I don’t know how I lived without it. It’s similar to 360 Audio on the Buds 2 Pro, while the Pixel Buds Pro are supposed to get Spatial Audio later this year. But Apple’s implementation is vastly better than 360 Audio.

Essentially, Spatial Audio creates a 360-degree sound stage when you’re attaching videos or listening to music. That means that sound is coming at you from every direction and as you turn your head you’re able to hear different parts of the music, or if you’re watching a movie you can hear the variations in sounds as a car drives past you and fades into the distance.

Take away the fancy features and at the core of AirPods Pro is the exceptional sound quality that’s automatically adjusted on the fly. I’ve yet to find another pair of wireless earbuds that comes close to the overall sound quality of the AirPods Pro.

Also: How to pair your AirPods and AirPods Pro with just about any device