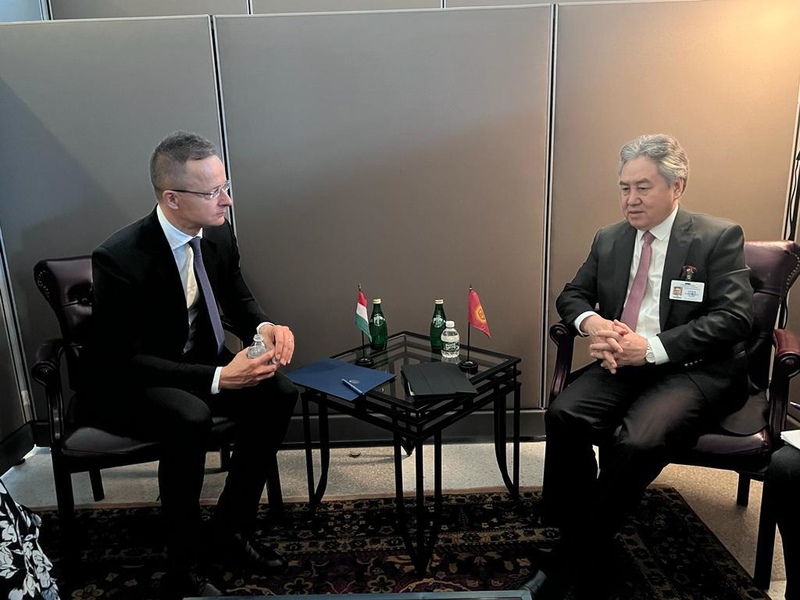 AKIPRESS.COM – Foreign Minister Jeenbek Kulubaev met with Hungarian Minister of Foreign Affairs and Trade Péter Szijjártó on the sidelines of the 77th session of the UN General Assembly in New York.

The parties also discussed the issues of cultural and humanitarian cooperation, highly appreciated the Days of Culture of Hungary in the Kyrgyz Republic and Days of Culture of the Kyrgyz Republic in Hungary, which were organized in August this year. Foreign Minister Kulubaev expressed interest of Kyrgyz young people in the educational program Stipendium Hungaricum and expressed gratitude for the scholarship quotas provided by Hungary to Kyrgyzstan.

FM Kulubaev also provided update on situation on the Kyrgyz-Tajik state border, emphasizing the consistent position of the Kyrgyz Republic on the need to resolve disputes between states exclusively through peaceful means, political and diplomatic methods.

The Hungarian Foreign Minister expressed regret over the escalation of the situation in the border areas and informed about the readiness of the Hungarian Government to provide humanitarian assistance to the population of Batken region of the Kyrgyz Republic.

Today, we’re announcing the redesign of our emojis: 1,888 of them, to be exact, plus five brand-new emojis to signal{...}

Tesla has been sued by a state civil rights agency for operating what it describes as a “racially segregated workplace”{...}

NASA has shared a set of three images from the universe on social media, highlighting the collaboration between its two{...}