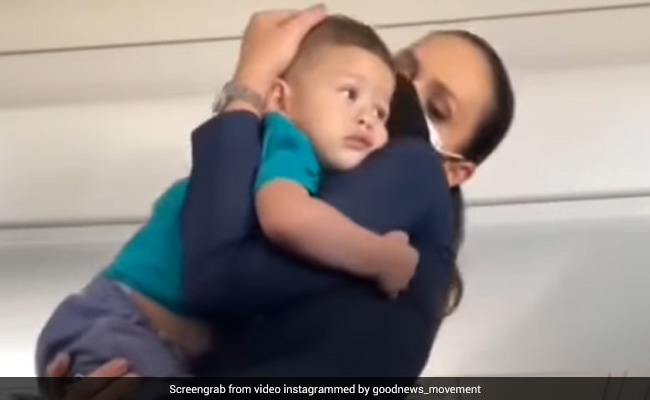 Such acts of humanity are sure to brighten your weekend.

The act of kindness of a British Airways’ crew member is winning the internet. The flight attendant took an inconsolable child in her arms and put him to sleep.

This happened recently on a flight in Brazil – between Brasilia and Cuiaba – and the video is now going viral. It was first shared on the Instagram page of Good News Movement on Friday.

“Flight attendant helps soothe crying child. ‘The flight attendant came and brought us some stickers for him to play with but the little one kept crying. She later brought some small cups to keep him busy but that didn’t stop his crying. So to our surprise she took him in her arms and stayed with him for a while until he fell asleep…She showed us love, affection and empathy!’ This took place of a flight from Brasilia to Cuiaba, Brazil,” the accompanying post read.

It has received more than two lakh likes since being posted. Users have praised the compassion shown by the flight attendant.

“Omg he fell asleep. I’m bawling,” a user posted in the comment section. “This is so kind of this flight attendant. I’m sure the parents felt such relief,” said another.

“We all need these glitches in the matrix to remind us that we can still feel,” read one of the comments.

One of the users even recounted his own experience. “British Airways flight attendants once spent a 10 hour flight taking shifts holding my inconsolable 11-month-old, because I was traveling alone and 7 months pregnant, and super sick. Flight attendants deserve WAY more credit. Thank your crew at the end of your flight,” the user said in the comment.

Such acts of humanity are sure to brighten your weekend.