Agora, a real-time engagement application program interface (API), has outlined the latest market sentiment about the future of the Metaverse in a survey.

The Santa Clara-based company surveyed 300 software developers to gather information on numerous topics related to the Metaverse, the emerging communications platform that combines the Internet and spatial computing.

The company currently partners with some of the world’s top Metaverse and technology companies, including HTC VIVE, Unity Technologies, and Hewlett-Packard (HP), among many others.

Tony Zhao, founder and CEO of Agorasaid the rising digital frontier presented a “great opportunity” for software developers, and that their skills and expertise were “more relevant and urgent than ever before.”

“The results of our study are a snapshot of how developers think about the metaverse, why it’s become arguably the biggest trend today, and what they think the future looks like. Because they’re on the front lines of virtually every development.” that takes place in the metaverse, their thoughts and opinions ultimately weigh heavily.”

Here are some of the key metrics and themes presented from the survey, providing a snapshot into the future of human connectivity.

One of the biggest challenges facing the virtual frontier, the survey found that 33 percent of respondents said the Metaverse would raise concerns about data privacy and security.

Zhao added that it was “not surprising” that developers responded that security had become a “big headache in the evolution of the metaverse”.

Gaming and entertainment at the top of the Metaverse

The survey also found that the industries most likely to benefit from the Metaverse were gaming and entertainment at 26 percent each, with telecommunications, retail and e-commerce, and healthcare at 12 percent, 11 percent and 6 percent, respectively.

The survey also found that more than half of respondents, or 55 percent, also believed the Metaverse would likely replace real-life social interactions, with 30 percent saying it was unlikely and 15 neutral.

Zhao added that face-to-face interactions are already “decreasing” today and that, within the Metaverse, “growing technology is already making social experiences even better and more desirable” due to advances in XR technologies.

He concluded, “So if things continue at their current pace, there’s a very real chance that the metaverse could mark the center of future human interaction.”

Respondents also underlined the growing digital economy fueling the development and monetization of the Metaverse, with 53 percent expecting NFTs to become the largest form of currency in the virtual world, 24 percent disagreeing and 23 percent feeling neutral. 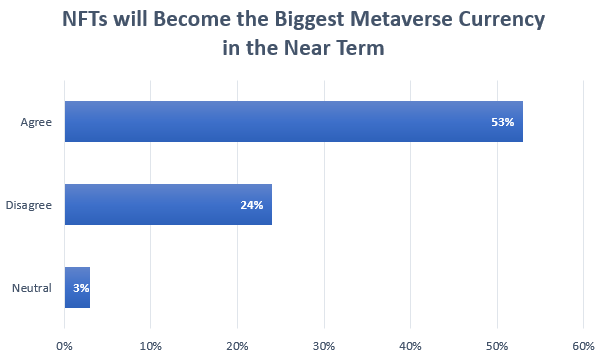 57 percent also said people would visit the Metaverse to buy, sell, store and trade their cryptocurrencies, compared with 18 percent of people who disagreed and 25 percent remained neutral.

70 percent also agreed that advancements in cryptocurrency and the blockchain were vital to the platform’s success, compared with 9 percent who said no and 21 felt neutral.

One platform rule them all?

Amid the current hype where companies would own the majority of Metaverse, 55 percent of developers surveyed believed Meta Platforms would rule the virtual landscape.

Companies such as Google, Microsoft, Apple and Amazon topped the survey with 9 percent, 7 percent, 6 percent and 5 percent, respectively.

Despite this, about 25 percent said a single company would not have control over the Web3-based platform, and another 25 percent said Meta Platforms would continue to dominate. Google, Microsoft, Apple and Amazon followed with 15 percent, 12 percent, 8 percent and 7 percent, the study concluded. 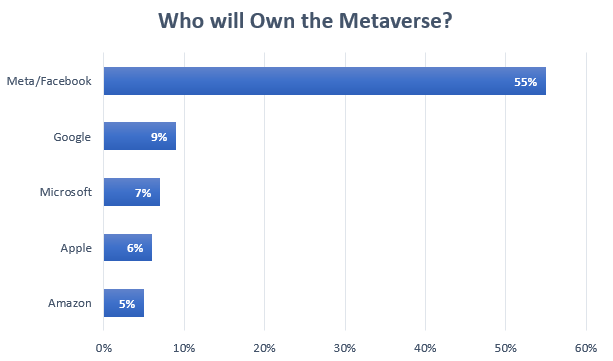 The news comes amid a massive wave of investment in the Metaverse as a viable solution to business demands, including financing from companies such as Accenture, Meta Platforms, NVIDIA, Microsoft, Qualcomm, NexTech AR, HTC VIVE, and many others.