One thing I’ve come to realize over the past 18 months is that I live in a Wi-Fi hostile area: a double brick-walled apartment where other networks broadcast on almost all sides, resulting in a congested patch of air.

In 2019 I tried the Google Nest Wifi. It was great in a townhouse setting, but it failed miserably in the new apartment landscape. In the end, the extension point refused to connect ever for more than a minute or two – despite hard resets and network rebuilds – leaving me to pray to the Google gods to provide a piece of firmware that would fix it. 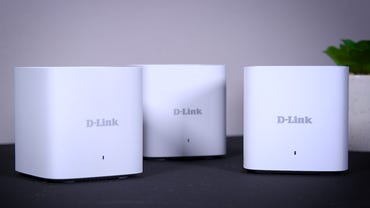 When the D-Link system works, it does a great job and I don’t miss the Google system for a minute. Wi-Fi 6 in itself is a much-needed upgrade, especially when there’s new hardware alongside your now-obsolete Wi-Fi 5 network.

The problem is the reliability and the inability to provide 100% uptime, it’s more like 99.9% which mathematically adds up to just under 2 minutes of downtime per day. This is useful because when it goes on the blip, it usually takes a minute to restore, which ultimately makes it reliably unreliable. If a failure does occur, the Ethernet connections will also follow, as the device will perform a full reboot.

The predominant feeling is that you wonder if the connection will last the entire video call, or will the movie not hang this time. At the very end, one morning, it was constantly resetting every minute, and it took a hard reset and network rebuild to get the main unit to talk logically again.

A mild rescue arrived when D-Link released a beta version of firmware that it was hoped would solve my problems. In short, it worked for the most part, but what matters most is what it reveals.

After years of being in the Google world, options that users can change are clearly seen as bad, to the extent that Google replaced its more complete Wifi app with integration into its much less functional Home app. The idea is for users to trust that Google’s cleverness will suffice.

Because the hype around AI is what it is, D-Link labels every intelligent feature as smart — like “optimizing” the network, which I think is a fancy word for channel switching — but thankfully it also keeps the default HTML settings pages that existed for decades on consumer modems and routers.

Importantly, this not only means that the user can load new firmware on their own, but also prevent the system from automatically upgrading in the future. There are many people on Google’s support forums who wish for such a luxury.

Another area where D-Link beats the Google system is cost. D-Link’s system with a base and two repeaters costs AU$350, while the Google 3-pack costs AU$550.

One area where Google still has the wood over D-Link is in the app. Google’s app is underpowered but behaves, D-Link’s app can never remember my login and always asks for location permissions — this is meant to be used in the installation process, but the app won’t open if you decline it.

While in Google land it would be a deal breaker, it’s just a minor annoyance because the old-school HTML settings are there and that’s all the app is essentially tweaking anyway. The only addition the app seems to offer is a weekly report on your network performance, which of course it claims is powered by AI, and it basically confirms how bad my Wi-Fi environment is.

My situation is not perfect, but it is improving. Maybe there is a combination of settings that prevents the repeater units from dropping out every now and then because if this network is firing on all cylinders it is very good. For now, though, just the ability to overrule the AI ​​smarts with some human stupidity and take charge of the network is enough.