welcome to Creators on the Risewhere—in partnership with global creator company jelly smack—we find and profile breakout creators who are in the midst of extraordinary growth.

They’re a mainstay of grocery stores everywhere: Square, bubbling tanks filled with live lobsters, their claws trapped shut with rubber bands, waiting to be scooped out by an attendant and boxed up to be taken home and…well, you know.

Most of these little ocean bugs meet unfortunate ends. But thanks to Brady Brandwood† Leon isn’t one of them.

Brandwood is a career TV and film producer, editor, director, and cinematographer who’s done work with–to name a few–NASCAR† NBC† Netflixthe Discovery Channeland Country Music Network† He started his YouTube channel as a hobby way, way back in 2006. And though his videos these days have higher production quality thanks to time-sharpened skills and improved tech, in terms of content they’re not actually all that different from his first uploads. Those also featured cinematic shots and Brandwood’s affable voice-overs detailing his adventures keeping koi and exploring cool nature locales like the Chatooga River and Henry’s Knob.

All of this explains why Brandwood might make a video about keeping an interesting aquatic pet. But why a grocery store lobster?

Brandwood wasn’t (and still isn’t) out to make a statement about meat-eating or animal treatment. He didn’t pick a grocery store lobster because he wanted to change the hearts and minds of millions with a touching tale of rescue and rehabilitation.

He describes buying Leon as a whim, something he’d occasionally considered doing and finally committed to because he had an empty 55-gallon saltwater tank in his living room that could use an inhabitant. Brandwood had previously filled the tank with ocean-dwellers like jellyfish, but it had been empty for some time, and he was curious what having a lobster would be like.

So, he picked Leon at random, and brought him home. 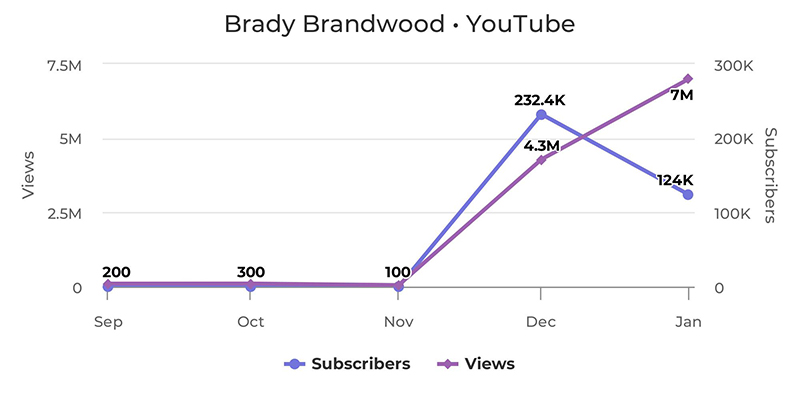 We don’t want to spoil too much here, but suffice to say Leon is in much different shape now than he was when Brandwood brought him home. Over the past four months, Brandwood has steadily helped him regain mobility and strength in his claws, has given him a new, bigger tank, and has experimented with him roommates (somewhat less than successfully).

At the same time, Brandwood has seen his YouTube channel’s engagement surge with people interested in Leon’s story. Before posting his video about adopting Leon, his channel netted between 100,000 and 200,000 views per month, and he usually brought in a couple hundred new subscribers. After his first Leon upload went viral–to date it’s got 15 million views–Brandwood’s monthly view count shot up into the millions, and he gained more than 400,000 subscribers.

The internet’s response to Leon has taken Brandwood totally by surprise.

We’ll let him tell you all about it below.

Tube filter: Tell us a little about you! Where did you grow up? How did you get into video production and what kind of career experiences have you had?

Brady Brandwood: I was born in Atlanta, and grew up in the North Georgia mountains, an area I call”Deliverance Country” because the cult thriller Deliverance was shot there when I was a young kid. My family doctor even had a role in it. From there I moved to Shelby, NC, where oddly there was a movie studio called Earl Owensby Productions. Earl made mostly B-grade drive-in movies, and later rented nearby facilities out to director James Cameron to make The Abyss†

Beyond these early connections to moviemaking, I also just had a strong desire to be a filmmaker, writer, and photographer. Since I was an early teen, I knew exactly what I wanted to do. So straight out of high school, I went to the Carolina School of Broadcasting, then got a weekend job at a small radio station at 19, then a job at a cable access company that did TV production. From there I managed to get a job at a production house that did dramatic-type sponsored films and documentaries. I wrote a couple of screenplays and pitched them to Hollywood, but it was just a very difficult business to break into, particularly for a young guy living on the other side of the nation in the south. So I settled into a career in TV production in the Charlotte, NC area.

I do work with NASCAR, FOX Sports, NBC, Netflix, Discovery Channel, SpeedSport, Country Music Network, Mad Toy Box Films, and a variety of other productions, and have gotten quite a bit of personal satisfaction out of my career, though I still haven’t made a feature film.

Tubefilter: For those who might not have seen your videos yet, why did you decide to buy Leon?

BB: Buying Leon from the grocery store was totally a whim, and evolved just like I described it in the first Leon video Keeping A Grocery Store Lobster As A Pet† I had a 55-gallon salt tank in the living room that was filled, running, and totally vacant. I had also looked at the live lobsters at the grocery store several times and thought, Wow, it would be cool to keep one as a pet and see what they are like†

So one afternoon when I was in there buying groceries, I decided to buy one, and anytime I’m fascinated with something, naturally I document it from all angles with cameras. It wasn’t until later after the video was uploaded to YouTube and I started reading some of the responses that I realized the touching aspect of it. I was just doing what I felt was needed, as I saw with the rehab of Leon’s claws. I’ve been in nature and in touch with nature all of my life, so it was just a natural response.

Tube filter: Did YouTube’s response to Leon take you by surprise?

BB: It actually did. The views and attention were a slow ramp-up in November, then just a huge explosion in December. It was suddenly in mid-December the views and comments just started building huge steam, and the unpredictable spiderwebbing outward was happening…Popular podcasters were mentioning Leon, the video was being shared to popular web locations like Reddit and others. Emails, phone calls, texts, and strangeness started flowing in…hate mail, love mail, strangers with solid advice and well wishes, strangers with weirdness and solicitations I was not expecting.

Tubefilter: In one of your follow-up videos about Leon, you had a sponsor. Was that your first video sponsorship, or have you had them before? What was that overall experience like?

BB: Yeah, that was my first YouTube sponsor, and it actually was a near-perfect collaboration. The topic was good, good for humor, the selling points matched well with my own interests and history. Also the people of that particular company that approached me were very professional. They did everything they said they would do, and professionally, and they gave me total freedom to blend the sponsorship into my material the best way I felt. So the product blended well with my content, and they were as happy as I was with the results. Nothing forced.

Tube filter: How did you approach YouTube pre-Leon? Was it a way for you to show your adventures and photography/videography skills, was it a hobby, was it a job…?

BB: You’re right on, it wasn’t a job—it was, and is, a place for me to share my interests and adventures with other people out there who have similar interests and a similar vibe. One of the very cool things about YouTube is it gives anyone a place to showcase their work. I wasn’t able to make “Hollywood movies” like I dreamed of, but YouTube gives me a place to share the videos and documentaries I produce to an audience…a worldwide audience. I do enter some of my projects into film festivals, and that’s a very satisfying outlet to get some of my work projected on a huge movie screen to a live audience. YouTube is similar in that it reaches, or is capable of reaching, an audience that enjoys the same stories and views in life that I do.

Tubefilter: Has anything changed post-Leon (or current-Leon, we guess is the right phrase!)? Do you have any new plans for your channel?

BB: No, nothing has changed. I understand that Leon has 15 minutes of fame. My content will stay the same eclectic mix, and hopefully there will be other videos that touch and reach viewers like Leon has.

Tubefilter: I noticed that you’re paying very close attention to feedback from viewers—things like people commenting on Leon’s carapace being sandy, or asking whether he’ll get a lobster friend. Why is it important to you to listen to what viewers are saying?

BB: I think a project having an audience is a very important factor. If there is no audience, then your video just becomes a video you wanted to produce for yourself. Audience response is also a gauge or meter of how good your video is…generally. If people like it, then generally you have done good work. Definitely there are weird, or negative responses, but if the positive responses way outnumber the negative, then you have an idea that you produced a video with good positive vibes.

Tubefilter: We’ve already seen some copycats scattered around, doing things like buying their own grocery store lobsters and crabs. Do you have any thoughts on this, or advice to people doing it?

BB: When Leon hit the big scene, I was totally expecting a lot of ripoffs and copycats. It seems to be the way of the world. We always hear the terms “innovators and imitators” and “imitation is the best form of flattery.” I personally prefer to just do what interests me and if it hits, it hits. If it doesn’t, then I’ve been there before. no prob.

Tubefilter: What do you hope people take away from your videos about Leon?

BB: That’s a great question, and a tough one… I have no interest in getting into the whole vegan versus meat thing. I think if we do some good things in life, and if we recognize that WE aren’t the only living beings inhabiting our little planet, then that brings a balance. I don’t know where we as a society decided some animals are pets, and some animals are food, but I’m really fascinated at how a lot of animals will interact with us if we just engage them and consider they have their own journeys in life too.

Tubefilter: The most important question: What is Leon’s favorite snack these days?

BB: That’s a simple one. Leon loves clams in the shell! He loves the ritual of opening the shell and the work and manipulation it takes to get the meat out.

Tubefilter: We asked above if you’ve got any new plans for your channel, but more generally, do you have any new things you want to tackle, or new goals for the future?

BB: Well, I am definitely looking at my career differently now. It’s really heaven to be able to produce videos that I personally want to produce, and have an audience out there that enjoys and supports the content I enjoy producing.