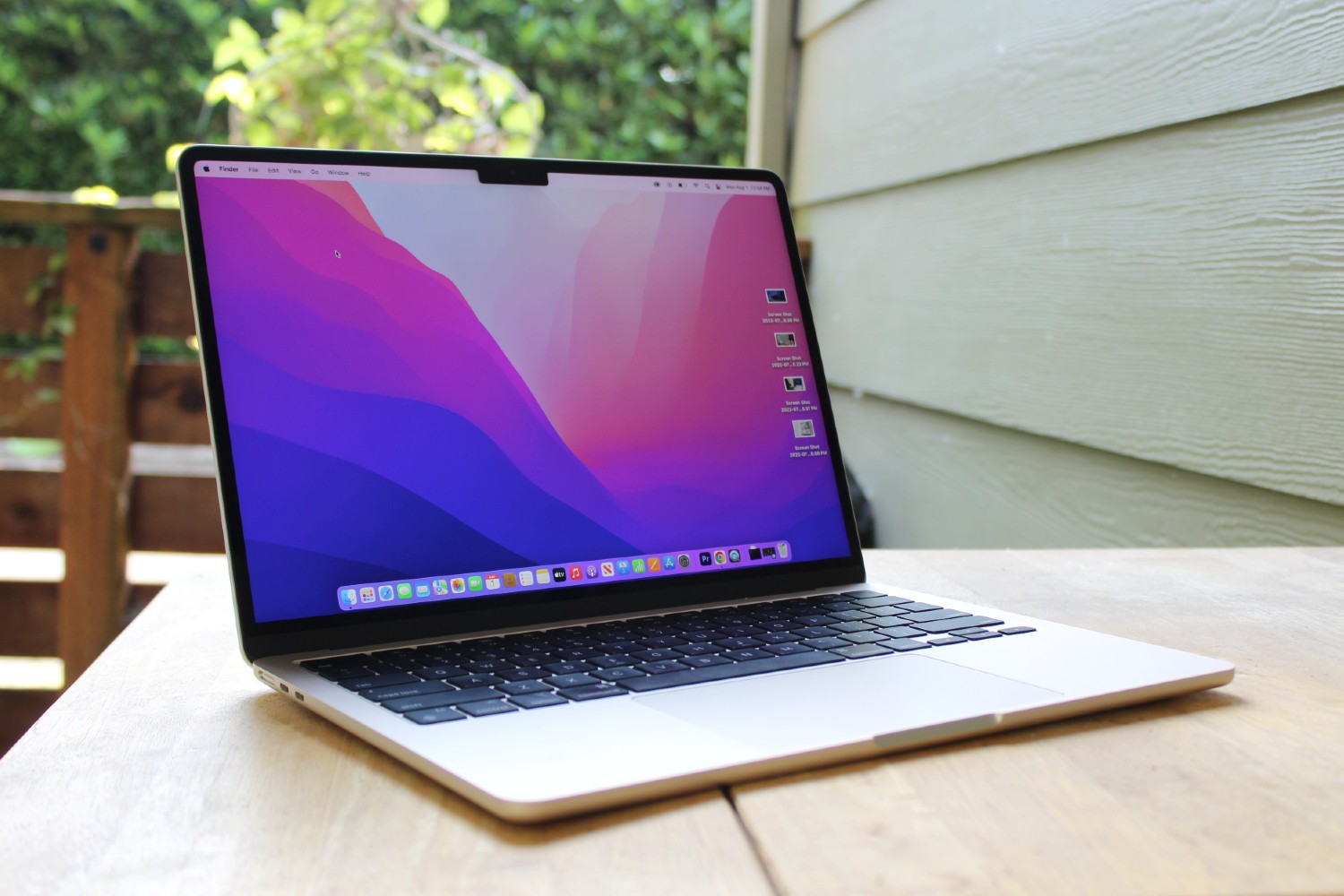 The M2 MacBook Air has been controversial since before its launch and now that it’s on the market, it continues to drum up criticism.

While the M2 MacBook Air hasn’t been out long enough to amass significant issues that require troubleshooting, but there are plenty of initial challenges that come with purchasing and owning an M2 MacBook Air, some of which have some easy workarounds to try out.

Can only use one external display

The M2 MacBook Air continues a design and functionality custom Apple has baked into several of its MacBook Air series products in that it has only one port for an external display. This news, upon the launch of the M2 MacBook Air, has been to the chagrin of many fans who were hoping the laptop would feature at least two external display ports — unfortunately, it’s a limitation of the hardware for now.

To remedy this, though, it’s as simple as buying a Thunderbolt dock or hub, which will expand to feature multiple external display ports.

That would have been the solution with the M1 MacBook Air as well, but because the M2 model now has a MagSafe 3 charging port, those USB-C ports are a bit more freed up. For example, you could plug one external display directly into your M2 MacBook Air through the USB-C port, which allows for a resolution up to 6K. You can then plug one or more external displays in through the dock.

Fast charging is not standard

If you skipped over this option at check-out, unfortunately, you may have found that your MacBook doesn’t support fast charging the hard way.

Outside of purchasing an off-brand fast charging adapter, you can always go back and purchase one of these faster chargers separately, but they’ll set you back $60 if you don’t bundle them with your purchase at check-out.

The M2 MacBook Air Midnight color is the closest to black and might even favor a shimmery dark blue in the light. However, this option appears to just be a topcoat and has proven to be susceptible to scratches, especially around the MagSafe area and other ports, revealing a silver base color underneath. Over time, the Midnight color option might chip and scratch away across the entire chassis. This has been reported by Reddit users, some saying that their shipment even came with small scratches out of the box.

Alternatively, you might consider choosing a different color. If the Midnight base color is Silver, you could choose the Silver color option to avoid the scratching issue altogether. Other M2 MacBook Air color options include Starlight and Space Gray, which have not had any complaints about scratching. If you already bought the Midnight color, consider using a protective case to guard against scratches.

Opinions about audio on the M2 MacBook Air might ultimately come down to personal preference. Some reviews of the laptop critiqued its updated design, which features a four-speaker sound system, including two located around the inner hinge near the display and two more speakers that have a hidden style, compared to the visible grilles on the M1 MacBook Air.

YouTuber MaxTech explained that the sound stage on the M2 MacBook Air is lost when the audio bounces off of the display and toward the users, as opposed the to surround sound experience provided by the prior MacBook Air model. He added that the extra woofers included at the bottom of the laptop don’t provide as much bass as Apple promised.

Other reviews have yielded more positive opinions of audio on the M2 MacBook Air. YouTuber CJ Unplugged admitted the laptop might not have as powerful audio as a MacBook Pro, but he had no issue with the sound stage on the M2 MacBook Air and found it enjoyable for recreational activities, such as watching YouTube. Meanwhile, Software developer Alex Ziskind described the laptop’s audio as true and realistic with a flatter frequency response. He stated that he preferred it to the more in-your-face mid-ranges of the M1 MacBook Air and said he could use the M2 MacBook Air speakers for creating simple videos.

Impressions of the speakers in our own review indicate that the speakers are significantly better than competitive laptops, even if they are far off from the sound system featured in the 14-inch and 16-inch MacBook Pro.

If you’re concerned that you might have any issues with the M2 MacBook Air audio quality, you might consider sound testing the laptop in-store before purchasing. Even more, keep in mind your AppleCare options and your return window.

Upon closer analysis, some reviewers noted while read speeds were slower, they were only off by about 500MB/s, which might not be noticeable to the average user. It was the write speeds that revealed the major dip in performance between the M2 and M1 MacBook Air models. To opt for this system would mean having to be extremely patient when exporting files.

You can also opt for the higher-end M2 MacBook Air, which features a 512 SSD and 10-core GPU. This model includes a double NAND chip design and has had no reports of speed lagging. Outside of the significant price increase, of $1,500 cost versus the $1,200 cost of the M2 MacBook Air base model, reviews of this variant have been largely positive.

Thermal throttling has been another heavy critique of the M2 MacBook Air, with several popular reviewers commenting on how overheating of the laptop has affected its performance, not only in strenuous tasks but also in typical usage. We measured internal CPU temperatures as high as 108 degrees Celsius in our own review, which is much hotter than comparable laptops are allowed to safely go.

You measure temperatures yourself with free applications like the Hot app from iMazing.

Of course, performance in normal tasks remains very strong, but if you’re looking to maximize what this laptop can do, there are a couple of solutions.

Fix 1: One potential fix for this issue is simply to upgrade from M2 MacBook Air base model from the eight-core GPU to a 10-core GPU for an additional $100 at purchase. This won’t fix the extremely hot internal temperatures, but the extra two cores should expand performance in tasks that can use the GPU.

Just don’t assume this will be mean great gaming performance. YouTuber Greg’s Gadgets observed that the spec upgraded M2 MacBook Air actually performed slower than the base model due to thermal throttling, while in a specific gaming scenario.

An iFixit teardown has revealed that the M2 MacBook Air does not have adequate cooling detail within its system. Instead of a heat sink, such as what is seen in the M1 MacBook Air, the newer model has only a thin metal shielding as its heat deflector. This was likely done to keep the laptop thin, but it has resulted in a device that has difficulty keeping internal temperatures under control.

Fix 2: Tech-savvy users can consider implementing this thermal-pad modification developed by MaxTech, which costs just $15. However, even this is just a short-term fix that works for a few minutes before the heat takes over.

The M2 MacBook Air has been introduced with the controversial top-notch design on its 13.6-inch display. While many might enjoy the larger and brighter display, which houses the laptop’s 1080p webcam in the notch, the feature could be an annoying addition for those who prefer a more uniform look to their Apple laptops.

Some suggest the notch could spearhead the introduction of an important feature like Face ID for the Mac line as a whole. Meanwhile others, like YouTuber, Tally Ho Tech believe Apple might update the upcoming iPhone 14 to a notch-less Face ID design and is now using those spare parts on the M2 MacBook Air. Either way, the notch is now on this laptop, but if you’re not a fan, there are some steps you can take to make it less conspicuous.

Fix 1: One such trick is using your applications in full-screen mode, which can be done by selecting the green circle in the upper-left corner of the app window where Apple’s window-control buttons are located. This allows the app to take over the entire screen, covering the notch. When you’re finished using the app you can either select the Esc key at the top left corner of the keyboard to bring up the window-control buttons again and select the green circle again to return to the usual browser size. Or you can use the Control + Command + F keyboard shortcut.

Fix 2: Another trick is adjusting apps that might become obstructed by the notch. You can go to Finder >Applications, then find the app in question. Then right-click the app to access its Get info option and select Scale to fit below the built-in camera box. Close the Get info window and open your app and it should then be adjusted to fit just below the notch.

Fix 3: The TopNotch application is one you can download and once enabled, it places a bar across the top of your M2 MacBook Air screen, blacking out the top-notch from view. You can download the application for free and it only requires macOS 11.0 or higher. The app also works with Dynamic Desktop wallpapers, rounded corners, and external monitors.

Once more, you also have the option of choosing a MacBook that doesn’t feature the top-notch, such as the M1 MacBook Air or M2 MacBook Pro.