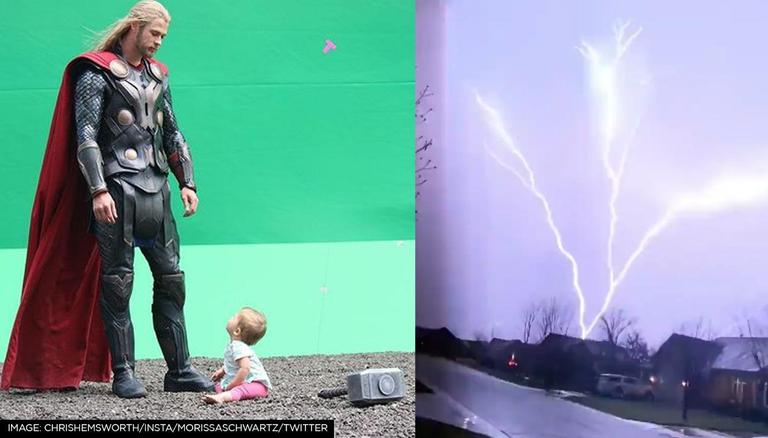 Thor: Love and Thunder marked an iconic comeback of Chris Hemsworth as the God of Thunder and garnered tremendous love from audiences from all over the world. The movie also marked the fourth instalment in the Thor series and saw many actors reprise their roles.

Meanwhile, Chris Hemsworth, recently, showed his humorous side after a fan shared a video of massive lightning and questioned Chris if he has caused it. Chris’ reply to the question is taking the internet by storm.

Chris Hemsworth gives a humorous response to a fan online

A Twitter user, sharing a video that shows a flash of massive lightning and thunder, related it to Chris’ character Thor, the God of thunder. The video had a single-word caption: “Thor?”.

Replying to this, Chris retweeted the post and wrote, “That was Zeus.”  The discussion continued after Chris responded as other fans jumped into the comments section to express their views on the same.  A user wrote, “Nah, that’s Thor”, while the other quipped, “I thought you killed Zeus? or is this Post-credit extended?”.

For the unversed, Thor: Love And Thunder marked the fourth instalment in the Thor series. The film takes place after the events of Avengers: Endgame as Thor leaves with his Guardians Of The Galaxy buddies. The movie also marked the return of Natalie Portman’s Jane Foster, who now has the powers of Thor and the ability to lift Mjolnir. The film also starred Tessa Thompson, Christian Bale, and Taika Waititi.

Prev post Some musicians with songs about "poop" say Amazon Music has become their biggest source of revenue, likely due to kids yelling the word at Alexa-enabled devices (Katie Notopoulos/BuzzFeed News)
Next post Windows 11 Insider Dev (25193) and Beta (22621.590 and 22622.590) Channels get new builds, download them now