FORT BEND COUNTY, Texas — Fort Bend County’s information technology and finance departments used engineering and surveying firm Cobb Fendley to conduct a broadband feasibility study to determine the state of internet connectivity in the county-especially in areas of the county that are unserved or underserved. The findings from this study were presented at a July 26 commissioners court meeting.

Some key insights from the workshop presentation include:

Results from the survey ranked internet provider options, availability, coverage, pricing, reliability and speed as well as ability to work from home and to access information online as poor overall.

Based on maps Cobb Fendley presented at the meeting, underserved areas overwhelm the west side of the county. An inventory of broadband assets and providers found these elements densely populated in the eastern portion of the county.

Findings from this initial phase of the study call for the construction of a “middle mile,” or a backbone network pathway of larger cables that shoulder most of the network traffic. The middle mile would be installed underground, along main roads, and along interstate and intrastate highways.

The goal of the middle mile, said Melissa Beaudry, a project manager for the firm, is to incentivize and decrease the cost for providers to build out the “last mile” that would connect the main network to a home or business.

The sum of construction would come to $36.76 million for materials and labor, with a 30% match by the county totaling just over $11 million.

The completion of this study and plan ensures Fort Bend County is adequately and accurately included in state plans to apply for grant funding, said Beaudry.

This funding is available through the National Telecommunications and Information Administration, an agency offering state and federal grant funding opportunities through the Middle Mile Grant; the Broadband Equity, Access and Deployment Program; and the Digital Equity Program.

The American Rescue Plan Act is also offering a Capital Projects Fund grant to states, territories and tribal governments for the completion of projects to enable work, education and health monitoring, including remote options, in response to a public health emergency. $500 million is available for Texas.

Broadband refers to high-speed internet access that is more available and faster than traditional dial-up access, according to the Federal Communications Commission. Broadband technologies include cable modems, fiber, wireless and digital subscriber lines.

Cobb Fendley recommends the use of fiber, which are small strands of cable made from glass that carry signals over light, to distribute broadband. Fiber has a 20-year lifespan, according to representatives of the firm.

Jarod Branstetter, who serves as Cobb Fendley’s project principal, said typically fiber is seen as the best material to implement broadband and connect to the internet.

“(Fiber) is foundational,” Branstetter said. “We don’t even use fiber for its full capacity yet-it’s future proof. The equipment we put on it, (even)10 years from now, will still be able to run just fine through fiber-optic cables. Whereas the older, copper version will have more limitations.”

Branstetter said the firm began the study at the beginning of 2022 by assessing the county’s existing infrastructure.

“We are seeing who’s got fiber, who’s got towers, who has access, what levels of service are being provided,” Branstetter said.

After analyzing data, the firm began theorizing what the “high-level” design of a network infrastructure would look like, Branstetter said. After that, they examined the potential cost of implementation.

“If there are gaps where there is not enough network infrastructure in this corner of the county, how can we get it there,” Branstetter proposed. “Why are these gaps here? Then we look at the needs and analysis.”

Judge KP George made remarks about broadband connectivity as a goal for other counties across the U.S. and asked the firm how they plan to incorporate findings from municipalities who have already implemented widespread networks.

Beaudry countered that the significance of Fort Bend County completing this study despite there already being completed studies elsewhere, is to contextualize any federal applications of broadband to make the county “more competitive on a national scale.”

Cobb Fendley has previously collaborated with municipalities, such as the city of Pearland, to implement fiber-optic network plans that connect various city-owned and -maintained equipment and facilities, such as traffic controller cabinets; school zone flashing beacons; and police, fire and city hall buildings.

Next steps for Phase 2 of this plan are to conduct preliminary engineering of the high-level design for the middle mile, identify potential public-private partnerships and apply for competitive funding sources for implementation.

Robyn Doughtie, IT director and chief information officer, recommended the formation of a broadband committee to address the grant funding available for broadband implementation. This will be an item for commissioners court to decide in an upcoming meeting.

This article comes from our ABC13 partners at Community Impact Newspapers. 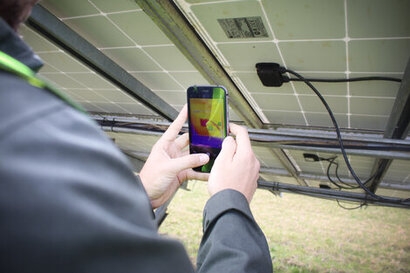 EyeSite is already widely used to streamline solar plant activity and provides a full suite of tools, including inspection management,{...}