Azio has never produced the most typical keyboards. Whether it’s their odd typewriter-style Retro Classic devices or the shiny, yet ultimately cheap-feeling Izo, the manufacturer has often prioritized form over function with its designs.

The Azio Cascade, the latest keyboard from the company, is different. It’s got a compact, responsive layout, with normal-shaped keycaps and Bluetooth connectivity. Unlike the $129.99 Izo, it benefits from being hot-swappable, which means that any keyboard hobbyists who want to tinker with it can replace its switches without pulling out a soldering iron. And most importantly of all, it actually feels nice to type on, which is what you’d hope when its eventual price will put it into competition with the likes of the $169 Keychron Q1.

Pre-orders for the Azio Cascade keyboard are opening today via a Kickstarter campaign, where you can order one for an early bird price of $89 or a regular Kickstarter price of $109. But after the campaign, which is scheduled to run for 30 days, Azio plans to sell the keyboard for $159. Azio expects the keyboard to start shipping to backers by the end of May. 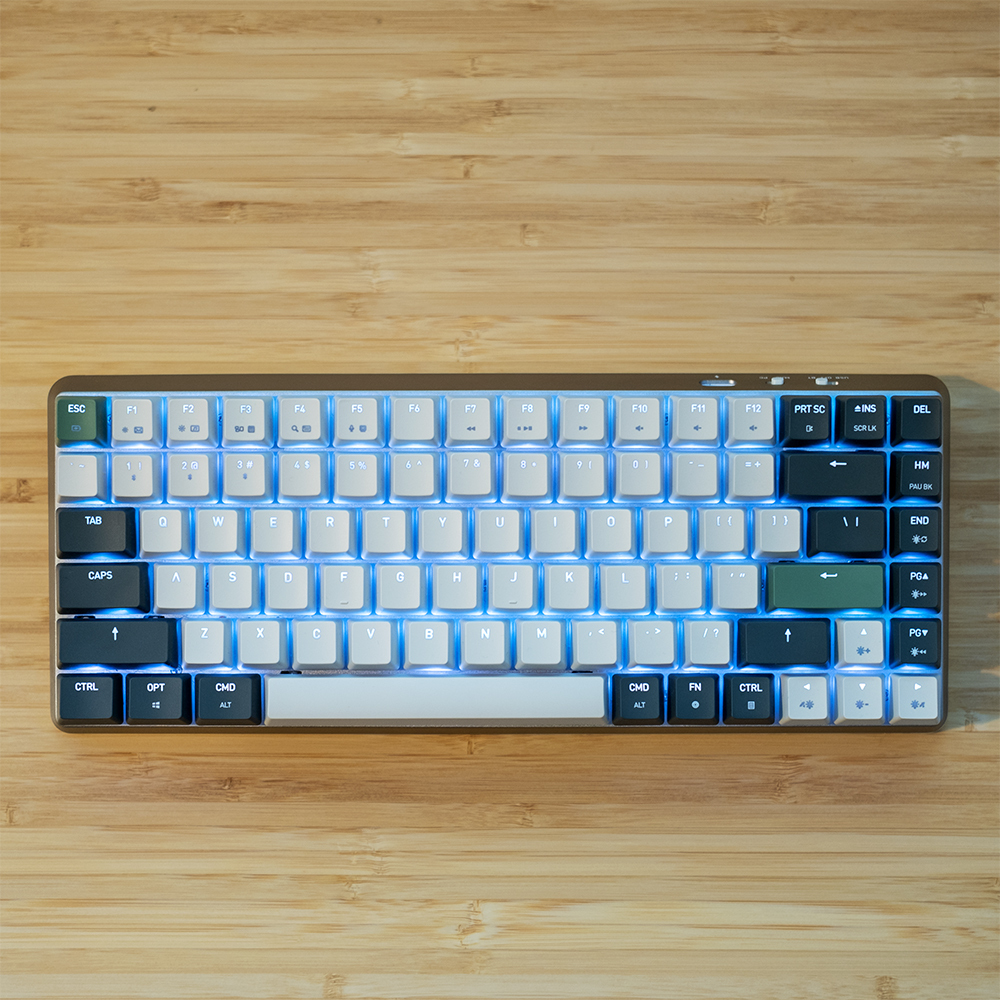 The Azio Cascade is available in two styles. There’s the Cascade Slim, which comes with low-profile keycaps and switches, and the regular Cascade, which comes with standard height switches and keycaps. Available keycap colors include Galaxy Dark and Galaxy Light, as well as Forest Dark and Forest Light. I’ve been reviewing a regular height Cascade, with Galaxy Light ABS keycaps (although Azio tells me that the colors of this review sample may not perfectly match the final colors).

Azio says a version with a European layout is coming later

Regardless of which model you go for, you’re getting a 75-percent keyboard, which is similar to the keyboards found on most laptops. You get an arrow key cluster and function row, but no numpad, and generally things are clustered tightly together. There’s no built-in ability to remap the keys on the Cascade, but I think its default layout is sensible enough that most people won’t need to. Around the right side of the board there’s basically every key I use on a regular basis, including a dedicated print screen button, and there are media playback controls built into the F-row. I wish there was a European ISO layout option at launch, but Azio says it has plans to produce a version with this layout at a later date.

Depending on whether you opt for the Cascade or the Cascade Slim you either get Gateron G Pro red, blue, brown, and yellow switches or Gateron G Pro red, blue and brown low-profile switches. The Cascade is also hot-swappable, meaning you can use an included switch-puller to remove the stock switches and easily replace them without needing to desolder anything. The Cascade’s circuit board supports 5-pin switches, which means it should be compatible with any MX-style switches you throw at it, while Azio advertises that the Cascade Slim is compatible with any Gateron low-profile switches. Note that the switches are north-facing, which can sometimes create compatibility issues with certain aftermarket keycaps.

The keycaps that came on my review sample were good but not great. Azio says the Cascade is available with ABS keycaps with laser-etched legends as standard, but there’s also an upgraded keycap option that uses hard-wearing PBT plastic with heat transfer legends (a similar printing process to dye-sublimated legends) for $30. My sample had the cheaper laser-etched ABS keycaps, and while the shine-through legends were generally clear and crisp, the additional non-translucent printed legends on certain keys were lower quality. For example, the Bluetooth logo printed on the 1, 2, and 3 keys is really crappy.

Wired, or wireless with up to three devices

Around the top of the Cascade, there’s a USB-C port that handles both charging and wired connectivity, as well as a three-way switch to turn the keyboard on and off and to put it into USB and Bluetooth modes. A second switch swaps the layout between Mac and Windows, although unlike Keychron’s keyboards, you don’t get both Windows and Mac keycaps in the box. Instead, the Option and Command keys have both Windows and Mac symbols printed on them. It looks a little messy.

Out of the box, the Cascade feels really nice to type on. Azio advertises that it features built-in silicone and foam dampers to eliminate harsh clicking or rattling sounds as you type. The result is a keyboard that feels lovely and crisp, and although its stabilizers have a little rattle to them, it’s not particularly egregious. I wouldn’t say it’s quite at the level of the Keychron Q2, but it’s in the same ballpark, which is to say that I’d be very happy continuing to type on this keyboard on a daily basis.

In the box, you’ll find a nice braided USB-C to USB-C cable, complete with a USB-C to USB-A adapter in case you want to plug the keyboard into a device with the older USB ports. If you use the keyboard wired then it functions much as you’d expect, while if you go wireless the keyboard can remember up to three devices. I paired the Cascade to both my laptop and my phone, and could then use a keyboard shortcut to quickly switch between them.

None of these are particularly unique features and have previously been available on everything from the Logitech Pop Keys to the Epomaker AK84S. But the Azio cascade feels infinitely nicer to type on compared to the Pop Keys’ weird typewriter-style keycaps, and I like its layout a lot more than the AK84S. It’s a more cohesive package.

The biggest drawback of the Azio Cascade is its battery life when used wirelessly with backlighting. After fully charging the keyboard overnight between Thursday and Friday, its battery indicator started flashing in the middle of the day on Tuesday and the keyboard ran out of battery entirely on Wednesday morning after just three days of daily office use with the keyboard’s backlighting on. That’s roughly in line with the 20 hours of backlit use that Azio promises.

After my past experience with the Azio Izo, I didn’t expect to like the Cascade as much as I did. But barring re-mappable keys, it’s got everything I want out of a modern keyboard. It’s wireless, backlit, hot-swappable, and most importantly feels great to type on. The keycaps have some rough edges, and battery life could be better, but depending on your preferences these are mostly forgivable sins.

At its Kickstarter price of $89 or $109, depending on how early you order, the Azio Cascade feels like a bit of a steal. It’s affordable, feature-rich, and customizable enough that you could make some upgrades down the line to overcome its non-battery-related shortcomings. At its eventual price of $160 I think it’s less of an obvious bargain. At that price, it’s competing with the wired Keychron Q1, which I’d personally opt for its slightly nicer typing experience, even if you do miss out on Bluetooth and backlighting.

If you’re happy to go down the Kickstarter then I can recommend the Azio Cascade. It’s feature rich and great to type on, and has decent wireless battery life if you’re willing to forgo backlighting. But if you’re not happy with Kickstarter, or if you’re reading this review more than 30 days after it publishes, then it’s a harder decision to make.

Photography by Jon Porter / The Verge

When they don’t know what they’re talking about…

Pixel 6 Pro Drops to Lowest Price Ever, Plus More