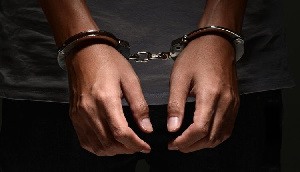 Police managed to arrest the suspect, but none of his accomplices were found in the house

The suspect David Egbert,26 was arrested on Wednesday, October 13, 2021 by a team led by DSP Harold Opoku Yamoah, the district police commander.

Starr News has learned that local police have arrested the suspect after being tipped off that the suspect and his accomplices were involved in internet fraud at a home.

Police went to the scene and were able to apprehend the suspect, but none of his accomplices were found in the house.

A search of the suspect’s home was conducted and police discovered that the suspect had grown plants suspected of being cannabidiol in two of his four-room apartments.

The United Nations has determined that developing countries such as Ghana are at a higher risk of cybercrime than developed countries.

Cybercrime in Ghana has taken on a rudimentary form of internet fraud targeting gullible foreigners, known locally as sakawa or “419”.

These crimes traditionally involved credit card and advance payment fraud, and took advantage of the vulnerabilities and gullibility of internet users.

Cybercrime has evolved into significantly more complex and sophisticated ventures targeting the wealthy and more valuable victims within and outside Ghana. Financial institutions also continue to face cyber-attacks that lead to huge losses.

The country is estimated to have lost more than $200 million in recorded cybercrime cases between 2016 and 2018.

More than half of these reported cases were related to fraud, according to the cybercrime unit of the Ghanaian Police Service.

Speaking at a workshop for journalists in Koforidua on Tuesday, October 12, 2021, Aaron Felix Opoku Boateng, the Authority’s program manager, said two major challenges in funding and low awareness of cybercrime are being addressed.

He said that fighting cybercrime is a collective responsibility and therefore called on Ghanaians to be aware and careful of their actions when conducting activities on the internet.