Unity Software (U 3.69%) was one of those companies that investors pushed to new heights on the back of the metaverse hype created by Facebook when it announced its name change to Meta Platforms (META 4.21%) at the end of October 2021. However, it wasn’t long before Unity began facing the brutal nature of reality, and the stock plunged over 80% from its highs. As a result, some investors might now wonder whether Unity can bounce back from its recent market misfortunes. 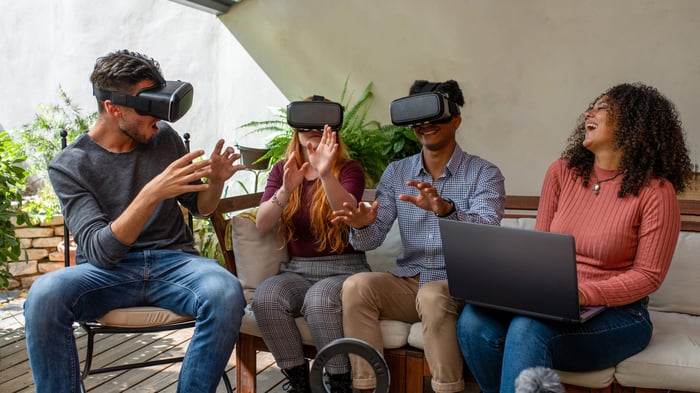 While Unity is best known as a development platform for creating 3D and virtual content, the company generates 64% of its revenue through Unity’s Operate Solutions division, which helps game creators monetize content through Unity Ads and in-app purchases.

Operate Solutions had a strong January start but stumbled in February and March as revenues fell significantly. Further, Chief Executive Officer John Riccitiello said during the company’s earnings call that the company narrowed down Operate’s problems to two self-inflicted issues.

First, Unity identified a fault in its platform that reduced the accuracy of its Audience Pinpointer tool — an ad tool that became popular after Apple’s privacy changes. Audience Pinpointer uses machine learning (ML) to help game developers target the users most likely to continue playing a game after installation.

Unity noticed the problem with Audience Pinpointer only after it started generating less revenue. Game creators often measure the effectiveness of their ad campaigns, and when the usefulness of Audience Pinpointer fell off because an unspecified glitch, the creators stopped using it, and revenues dropped.

Second, Unity’s ML algorithm ingested some bad data from a large customer. Consequently, Unity lost the value of a portion of its training data.

2. Unity was unprepared for a poor market environment

Since going public in September 2020, Unity has pursued revenue growth at the expense of profitability. To illustrate, this chart shows Unity’s operating costs rising faster than its revenues. 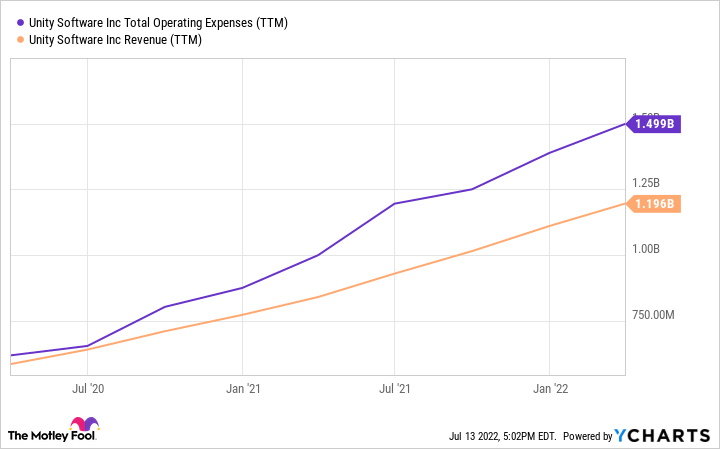 Rising interest rates erode the value of future earnings — which hurts unprofitable companies more than profitable companies. And Unity’s bottom-line profitability in the form of net income has consistently worsened over the last two years. 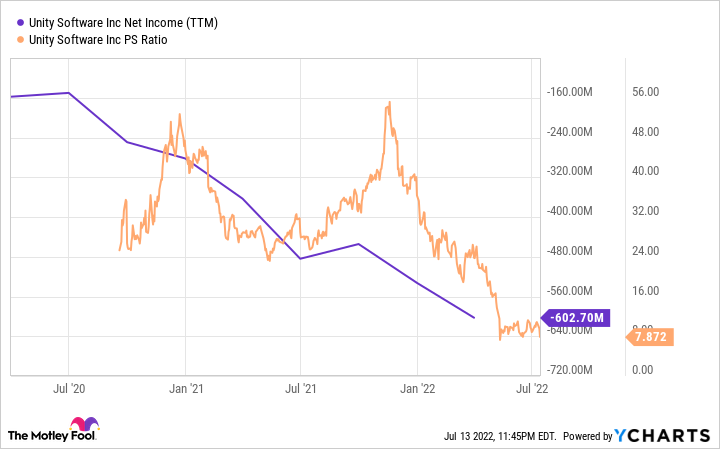 As you can see above, Unity’s price-to-sales ratio dropped off a cliff in late 2021, as investors were already mulling the impact of the Federal Reserve raising interest rates to rein in inflation.

While Unity might have been pushing for growth at all costs for the last two years, it appears management recognizes the environment it is in and has quickly biased the company toward profitability over growth.

On the Q1 2022 earnings call, Chief Financial Officer Luis Visoso said the company would reduce spending by $100 million to achieve profitability in the fourth quarter of 2022 — sooner than previously communicated. And the company expects to be profitable for the full year of 2023.

However, since the most significant portion of operating expenses is personnel-related costs, Unity plans to achieve its $100 million in cost savings through layoffs. At the end of June, Unity fired 4% of its workforce. And according to the website Kotaku, the releases occurred several weeks after CEO Riccitiello assured workers that Unity wasn’t in financial trouble, and that there wouldn’t be any layoffs — a misleading statement that created employee discontent. In addition, it doesn’t help employee morale that Unity acquired ironSource (IS 6.40%), whose tools help app developers make money off their creations, only two weeks after the layoffs.

So while Unity has a very high upside in its end markets, it also has a very high execution risk from the consequences of laying off employees while simultaneously acquiring another company. As a result, most investors will probably be better off avoiding this stock.

Does an Ionic Air Purifier Clean Better Than Standard Units?